Law equal for all, raid my house if I do anything wrong: Narendra Modi 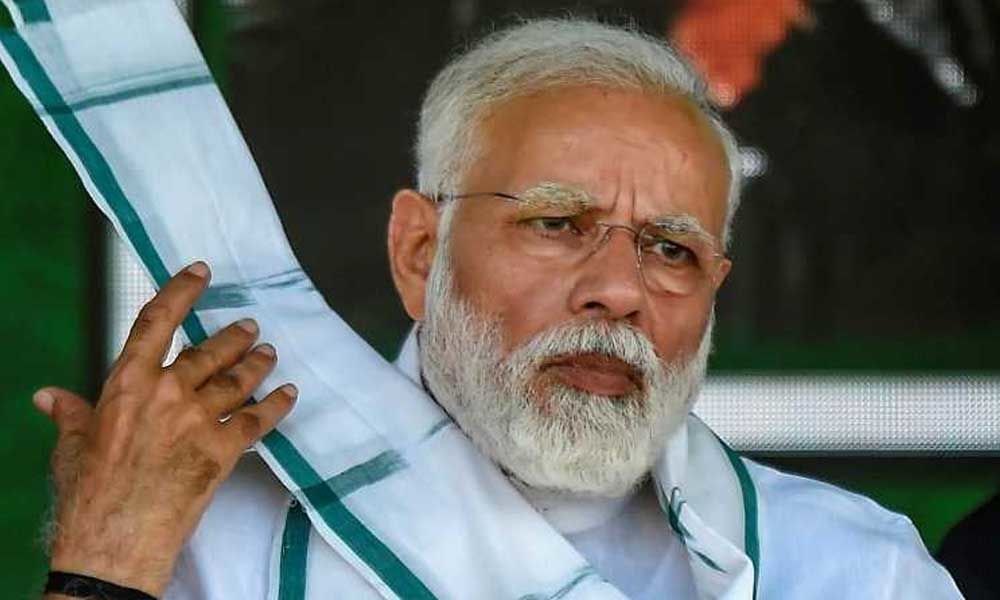 Talking about the Congress rule in the state, he said the Kamal Nath government has resorted to power cuts in the name of halving electricity bills of consumers.

SIDHI/JABALPUR: Dispelling the impression that the recent searches by Income-Tax department were politically motivated, Prime Minister Narendra Modi Friday said the law is equal for all and his residence should also be searched if he has done anything wrong.

Addressing a public meeting at Sidhi in Madhya Pradesh, he targeted the Congress on corruption, saying it committed the "Tughlaq Road election scam", whose money was being used for the poll campaign of its chief Rahul Gandhi.

Referring to recent I-T raids at the premises of aides of Madhya Pradesh's Congress Chief Minister Kamal Nath, Modi said, "They are crying that why were they targeted by the agencies. But they were raided as they indulged in wrongdoing. If Modi is found to do such things then he should also not be spared."

The Central Board of Direct Taxes had said the department has also detected a trail of Rs 20 crore suspect cash allegedly being moved to the "headquarters of a major political party in Delhi" from the house of an important person who lives on Tughlaq Road, home to many VIPs.

Slamming Kamal Nath without naming him, Modi said money sent by the Centre under different schemes, including for providing nutritious food to pregnant women, is being swindled by the Congress government in Madhya Pradesh.

"This stolen money is being sent to Tughlaq Road, where the bungalow of a big Congress leader is located, and from there it is routed to the place of `naamdar' (apparently referring to Gandhi) for funding his electioneering," Modi said.

Talking about the Congress rule in the state, he said the Kamal Nath government has resorted to power cuts in the name of halving electricity bills of consumers.

"This is an example of how they function," he said, warning people not to vote for the Congress in the Lok Sabha polls.

Modi said money disbursed by the Central government for farmers in Madhya Pradesh under its schemes was yet to reach the beneficiaries.

He accused the Nath dispensation of not sharing with the Centre the list of farmers requiring the help.

Taking a jibe at the MP chief minister, Modi said perhaps Nath was "too busy" to share the list with the Centre due to his Switzerland visit and political grooming of his son (who is contesting Lok Sabha election).

He criticised the Congress for the way it had dealt with the issue of terrorism while in power and remarked that the approach to tackle the menace has changed under the NDA government.

"The present government won't spare any terrorist and will hit them by entering in their den," the PM said.

Modi said he alone will not be able to root out the menace of terrorism and sought people's support by way of their votes to accomplish the task.

He asked the people who from among the opposition wanting to become the PM can wipe out terrorism.

When they chanted his name in response, Modi said it is not him but their "one vote" that would help wipe out terrorism.

He took potshots at "those from the opposition parties aspiring to become the next prime minister".

They have already ordered their tailors for new attires, he added.

Addressing another poll rally in Jabalpur, Modi said the Congress was targeting him over demonetisation owing to the "devastation" suffered after the note ban by those who had invested that party's corruption money in the realty sector.

Because of the note ban decision, prices of housing for the common man came down, but those who had invested the money of Congress' corruption in the (realty) sector have been devastated, Modi said.

"Three lakh 'farzi' (bogus) companies which were factories creating black money have been shut down. They are also causing a lot of pain for the Congress. Modi sealed 3 lakh companies where such things were going on," he said.

Modi said a majority of Indians supported the note ban despite the difficulties which it entailed.

He said a campaign was launched when he started acting against black money and corruption and public was instigated by showing videos of people standing in queues outside banks.

A few people sitting in AC rooms of Delhi celebrated the decision, saying 'Modi's fate is sealed', but the majority countrymen have proved them wrong, he said.

Dacoits and kidnappers have got new energy after Congress came to power in Madhya Pradesh last year, he said.

Madhya Pradesh, which has 29 Lok Sabha seats, will have four-phase polling starting from April 29.