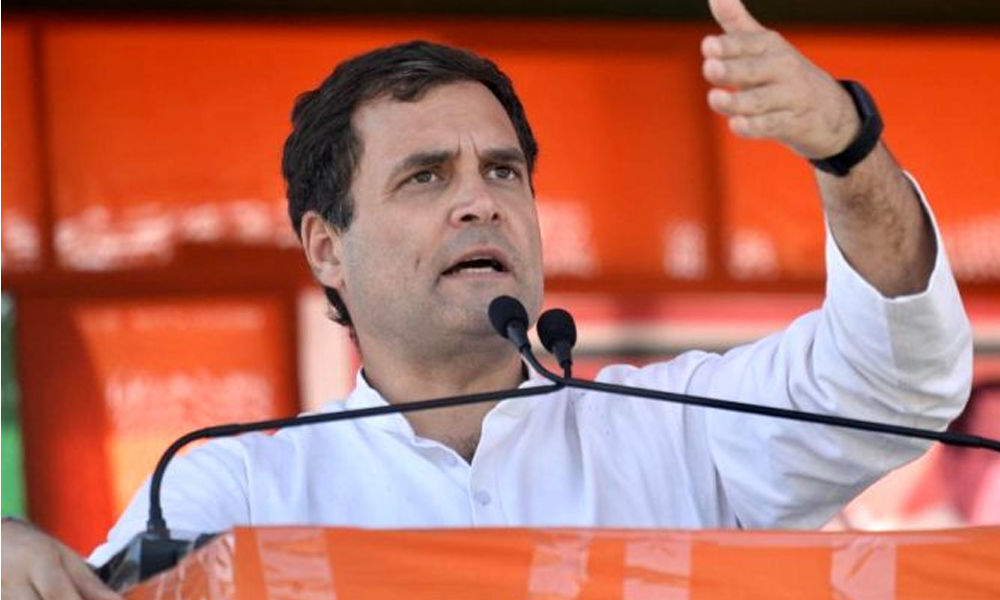 Reiterating his "chowkidar chor hain" barb at Modi, the Congress president said, "Only rich people...have chowkidars outside their houses, farmers and the poor don't have watchmen. He (Modi) is the 'chowkidar' of the corrupt and fugitives such as Nirav Modi, Mehul Choksi and Vijay Mallya."

In a scathing attack on the TMC-led government in West Bengal, Gandhi said, "What kind of governance she is delivering where only she has the right to speak and nobody else has any say?"

"Nothing has changed in Bengal in the past so many years. There have been no development of Bengal under Mamata Banerjee's rule. She too has not fulfilled her promises," he charged.

People used to be targeted and terrorised under the Left rule and the same continued under the Mamata Banerjee dispensation, he said.

Gandhi's rally in the North Malda constituency, once a Congress bastion, assumes significance as the party is facing an uphill task to hold onto its base due to large-scale defections of party leaders, including its sitting MP Mausam Benazir Noor, to the Trinamool Congress.

The BJP too has been surging in the area with several leaders from opposition parties, including the CPI(M), joining it recently.

The BJP nominee from the seat is Khagen Murmu, a CPI(M) MLA who recently joined the party.

Without naming Noor, who is the niece of the late Congress stalwart A B A Ghani Khan Chowdhury and has been fielded by the TMC this time, Gandhi said she "cheated you by leaving the party" and appealed to the electorate to vote for Congress candidate Isha Khan Chowdhury.

He promised that if his party comes to power, it will bring in minimum income guarantee scheme.

The Congress is fighting to keep the country united and the upcoming Lok Sabha elections will be a fight between ideologies of the Congress and the BJP-RSS, Gandhi said.

"Prime Minister Narendra Modi keeps on lying all day. Wherever he goes he lies...The upcoming Lok Sabha elections will be between ideologies. On one hand you have the Congress party which is fighting to keep the country united and on the other hand the BJP-RSS-Narendra Modi want to divide the country on religious, language and caste lines," he said.

Modi had scrapped the previous Rafale deal and ensured that only Anil Ambani gets the new deal and forced the French authorities to select him as their partner and looted Rs 30,000 crore of public money, Gandhi said repeating his charge of 'Chowkidar Chor Hain'.

"In 2014 Narendra Modi had said he doesn't want to be Prime Minister he wants to be a chowkidar. But when the people of this country has caught him (Modi) red-handed, he is speaking of nationalism and is saying everybody is a chowkidar," he said.

The country, he said, had recorded the highest number of unemployed youths in the last 45 years and Prime Minister Modi had "ensured" scarcity of jobs by implementing demonetisation in 2016.

"Once we form the next government at the Centre we will fill up all vacancies at government offices. We will ensure minimum income guarantee scheme. We will change the Gabbar Singh Tax of Narendra Modi to GST (Goods and Services Tax) with nominal rates," he said.

Praising Congress workers in the state for their dedication to the party despite odds, Gandhi claimed that they are facing persecution during the TMC rule similar to those during three decades of Left rule.