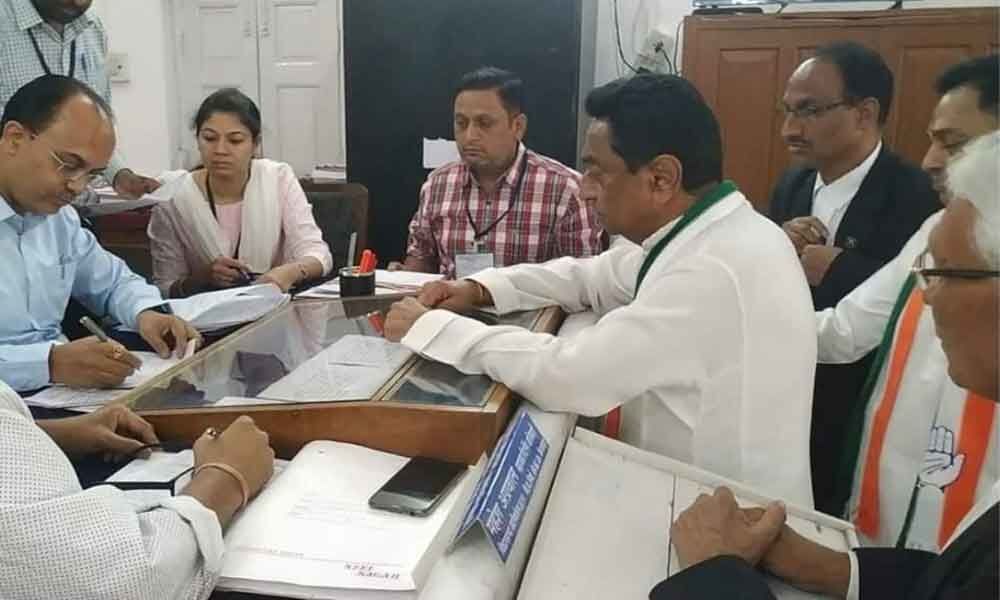 Before heading to file their nominations, the Naths offered prayers at a Hanuman temple close to their bungalow in Shikarpur area.

Nath, 73, dressed in a white kurta-pyjama, was accompanied by his wife Alka Nath and son while filing his papers for the Chhindwara Assembly seat by-election.

Minutes later, Nakul Nath, dressed in a similar attire, accompanied by his parents and wife, also submitted his papers to contest the Chhindwara Lok Sabha constituency.

Before heading to file their nominations, the Naths offered prayers at a Hanuman temple close to their bungalow in Shikarpur area.

After filing the papers, the family prayed at the famous Ram temple, located near Shyam Talkies here, and thereafter reached the Dussehra Maidan where the procession culminated.

The chief minister, who is also the MP Congress president, has represented the Chhindwara Lok Sabha seat nine times.

He is contesting the bypoll because, as per rules, he needs to get elected to the state Assembly within six months of being sworn in as the chief minister.

He is fighting the Assembly election for the first time while is 44-year-old son, a Boston University graduate, is making his political debut. Kamal Nath was sworn in as the chief minister in December last year.

He did not contest Assembly polls in which the Congress ended the Bharatiya Janata Party's (BJP) 15-year rule in the central state.

To facilitate his entry into the MP Assembly, Chhindwara MLA Dipak Saxena earlier resigned from the seat.

In the 2018 Assembly polls, all seven seats falling under the Chhindwara Lok Sabha constituency were won by the Congress.