Not afraid, all religions have terrorists: Haasan as stones, eggs hurled at him 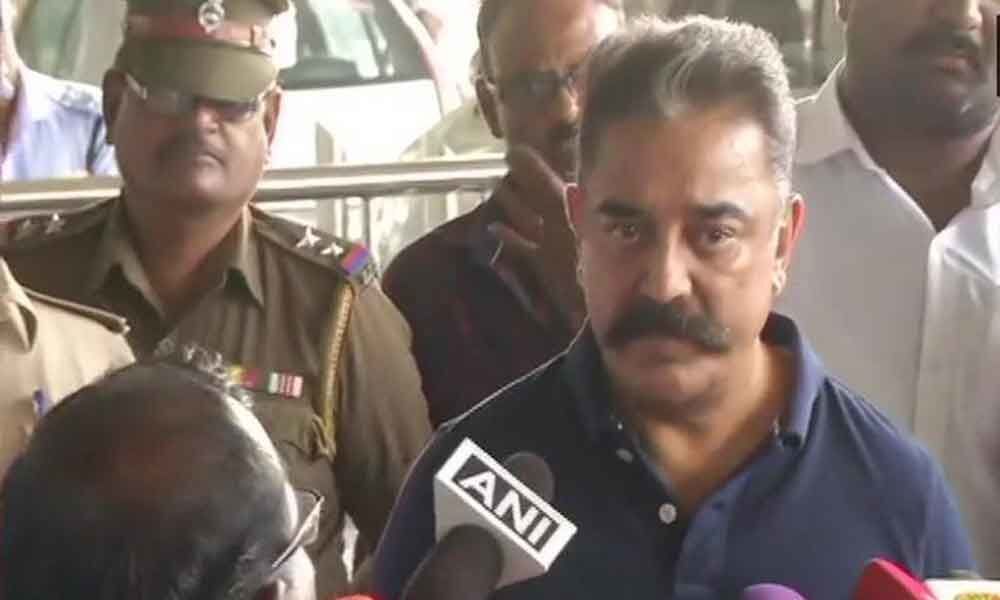 Meanwhile, police in Coimbatore district denied permission for the actor to undertake campaign for the Sulur bypoll on Friday.

Aravakurichi: After stones and eggs were hurled at a public meeting of Makkal Needhi Maiam founder Kamal Haasan said, "I feel the quality of polity is going down. I don't feel threatened. Every religion has their own terrorists, we cannot claim that we are sanctimonious. History shows that all religions have their extremists."

Meanwhile, police in Coimbatore district denied permission for the actor to undertake campaign for the Sulur bypoll on Friday.

No one was injured in the incident at Aravakurichi which happened when Haasan was getting off the stage after completing his address. He was escorted to safety, police said.

MNM workers roughed up the two persons suspected to have hurled stones and eggs, before police rescued them and took then away for questioning. MNM workers staged a protest but police officials held talks with them.

The incident comes a day after footwear was hurled towards a vehicle from which Haasan was addressing an election meeting in the Tirupparankundram Assembly constituency in Tamil Nadu on Wednesday evening.

Speaking on protest over Godse remark, Haasan said he was not afraid of being arrested.

"Let them arrest me. If they do that it will only create more problems. It is not a warning but only an advice," he added.

Haasan, founder of new political outfit Makkal Needhi Maiam (MNM), kicked up a controversy this week with his comment that "free India's first extremist was a Hindu", a reference to Mahatma Gandhi's assassin Nathuram Godse Police said permission has not been granted for Haasan to undertake the bypoll campaign in Sulur in Coimbatore in the backdrop of the ongoing controversy.