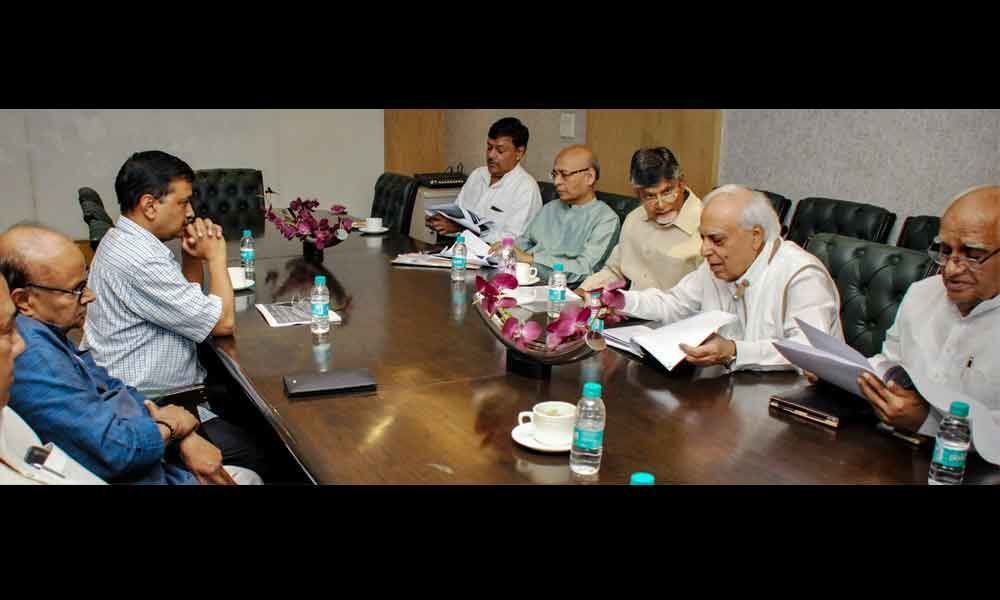 New Delhi: New Delhi: Questioning the reliability of the electronic voting machines (EVMs), leaders of 21 Opposition parties on Sunday demanded a mandatory paper trail count in at least 50 per cent of the Assembly constituencies in all the Lok Sabha seats.

Addressing the media, leaders of the political parties, representing 70 per cent of the population, said the BJP onslaught on democratic institutions was continuing unabated and the latest to fall victim to the vindictive politics of PM Narendra Modi was the Election Commission of India.

Spearheading the onslaught on the Centre, AP Chief Minister Chandrababu Naidu said the meeting of the 21 Opposition parties decided to file either a fresh petition or a review petition in the Supreme Court seeking 50 per cent VVPATs' counting.

They would also take the issue of malfunctioning of the EVMs in the recent Assembly elections in AP across the country and create awareness among the voters.

Naidu said the technology was misused during Telangana elections and 25 lakh votes were removed.

The election officials apologised when the number of votes polled were more than the total number of votes. He said the services of contract employees were used for maintenance of the EVMs.

Who will be responsible if they resort to any wrong doing? Will the Election Commission own the responsibility? Naidu asked. He said around 20 to 30 per cent EVMs mal-functioned during the elections in AP.

It was appalling that every vote in the malfunctioning machine went to the BJP, which went on to prove that EVMs' were not malfunctioning but were manipulated to do so, the Opposition leaders said.

The leaders said paper ballot was the best and if it was not possible to switch back to it during this election, at least 50 per cent VVPATs must be counted.

Naidu gave a power point presentation to reiterate replacement of the existing EVM election system with the ballot paper.

The colossal failure of the election machinery in AP elections should be an eye opener to all, he said. "It is not because I am raising this issue out of fear of losing the election.

This is a larger issue concerning our democracy and the nation. I want everybody to know what is happening and be with us," he added.

Naidu questioned the rationality of the Centre in investing Rs 9,000 crore on VVPATs if only one machine was to be counted. The Chief Minister said even the developed countries like Germany which had experimented with EVMs have preferred paper ballot. He said there should be transparency in the election process.

The Election Commission lost credibility with the non-functioning of EVMs at majority places in Andhra Pradesh, Naidu said and took exception to the ECs' condition for talks that the whistle-blower on EVM tampering Hari Prasad should not attend the meeting scheduled for Monday.

The EC is entertaining those who have 31 cases against them and was instantly acting on their complaints, but they are objecting to the demo by Hari Prasad.