Rahul Gandhi will be rejected by people of Wayanad: Piyush Goyal 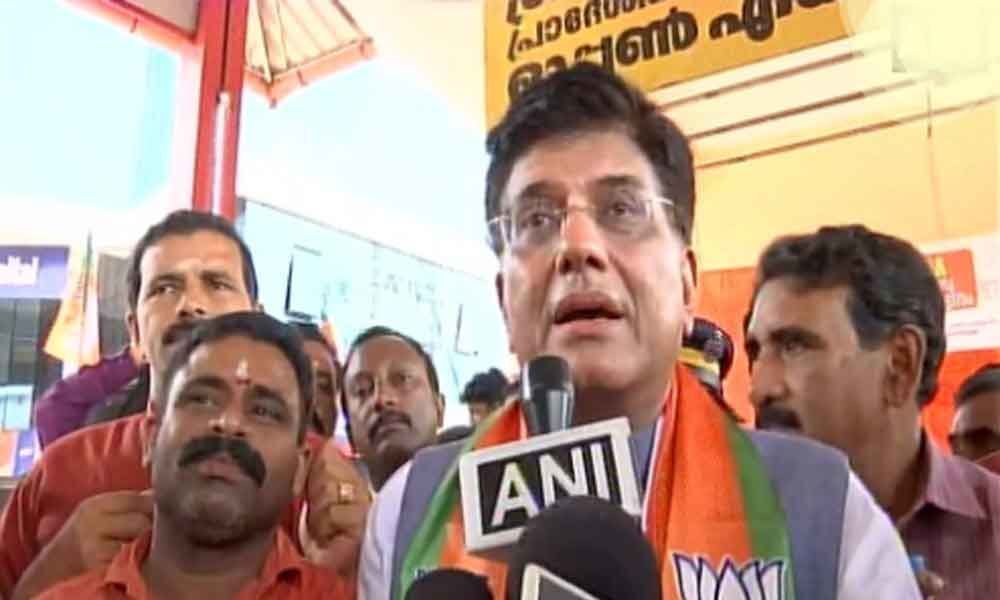 He also alleged that many BJP and Rashtriya Swayamsevak Sangh (RSS) workers were killed by CPI(M) and Congress.

Kayankulam: Launching a scathing attack on the Congress president Rahul Gandhi, Union Minister Piyush Goyal on Wednesday said people of Wayanad do not want a 'discharged battery' and 'second-hand material' and he is sure people will reject him.

"People in Kerala do not want a second-hand material and a discharged battery. I am sure people of Wayanad will reject Rahul Gandhi," Goyal said addressing an election rally here.

"As he is afraid of defeat in Amethi, he has to run all the way to Wayanad. Rahul has lost the confidence of the people of India. I am sure the people of Kerala will defeat him so that, in the next election he will have to look for a constituency in some other country," Goyal added.

The Union Minister praised the National Democratic Alliance (NDA) candidate for the Alappuzha Lok Sabha constituency, KS Radhakrishnan, and called him "a man of integrity."

"Radhakrishnan is a man of integrity and understand the pain of a common man like Prime Minister Narendra Modi. In the last Lok Sabha elections, candidates from Congress and Communist Party of India (Marxist) got disappeared. But, Radhakrishnan is consistent. Congress president himself ran away from Amethi as he is facing Union Minister Smriti Irani there," he said.

Union Min P Goyal: Rahul Gandhi is afraid of defeat in Amethi&has to run all the way to Wayanad...he has lost the confidence of people of India. I am sure the people of Kerala will defeat him so that in next election he will have to look for a constituency in some other country. pic.twitter.com/cV8NmXyImR

Continuing his tirade against the Congress and CPI (M), Goyal said: "Both the parties are known for their double standards when it comes to women empowerment and their dignity. They did not cooperate with the Centre even on triple talaq issue. They do not want the safety of the Muslim women."

He also alleged that many BJP and Rashtriya Swayamsevak Sangh (RSS) workers were killed by CPI (M) and Congress.

Polling in Kerala will be held in a single phase on April 23. The counting of votes will take place on May 23.