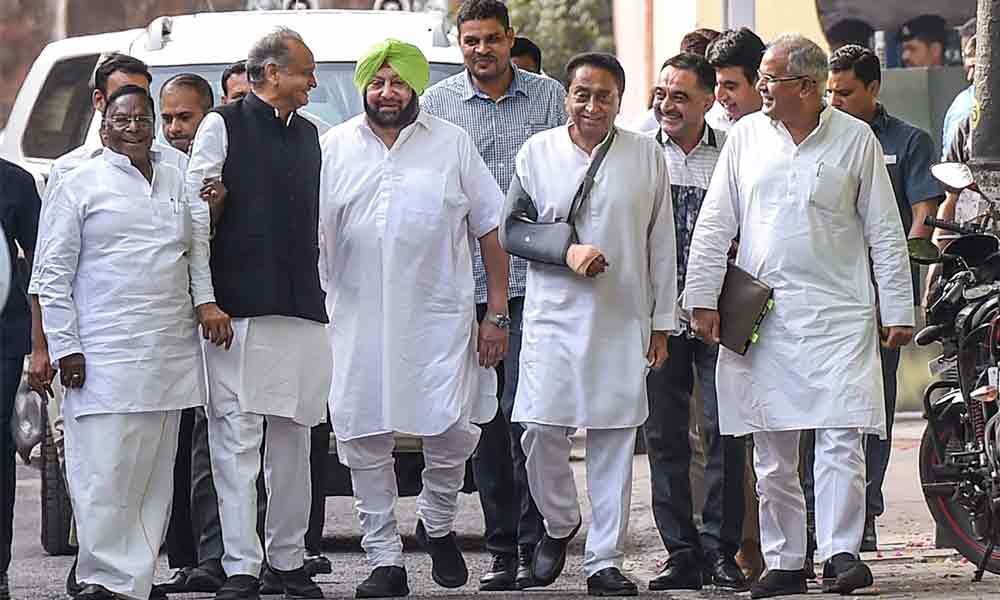 Rajasthan Chief Minister Ashok Gehlot, speaking for all five, said after the 90-minute meeting with Gandhi that they had "a free talk" and told him that election defeats were not new.

"We conveyed our feelings. He listened to us carefully and we think that he will decide at the appropriate time," Gehlot told the media.

Asked if he (Gehlot) and Madhya Pradesh Chief Minister Kamal Nath had offered to resign from their posts after the Congress rout in the two states, Gehlot said that offer was made on the very day the election results came out. "It is up to the party leadership and the High Command to decide on that."

Among the others who met Gandhi at his residence were Amarinder Singh from Punjab, Bhupesh Baghel from Chhattisgarh and V. Narayansamy from Puducherry.

Before the meeting began, both Gehlot and Baghel said that Gandhi should remain the Congress President. But Gandhi told reporters in Parliament: "I have made my decision clear.

You all know it." This was the first meeting that Gandhi, who has decided not to head the Congress any more, had with his Chief Ministers after the Lok Sabha elections in which the party won just 52 seats.

Gandhi himself lost in Amethi in Uttar Pradesh although he was elected to the Lok Sabha from Kerala. Since then, scores of Congress leaders have given up their posts in apparent show of "solidarity" with Gandhi so that he has a free hand in reorganizing the country's oldest political party.

Gehlot tweeted earlier: "We firmly believe that only he (Gandhi) can lead the party in the current scenario. His commitment towards the well being of our country and countrymen is un-compromised and unmatched." Baghel added: "We all want Rahulji to remain the President.

He should continue to provide the leadership." On Monday, many party activists staged a hunger strike at the Congress headquarters in support of Gandhi and later reached his residence shouting pro-Gandhi slogans.