Trust board, civic body sit on move to ban plastic in Durga temple 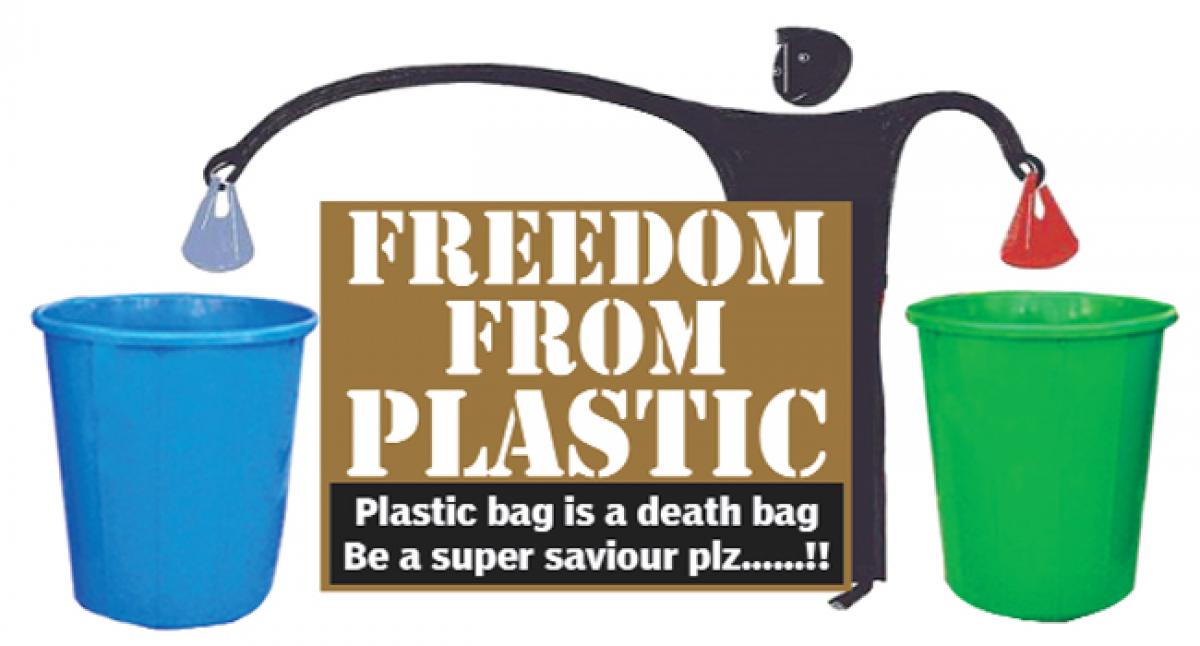 The proposal for banning plastic in Durga temple is still pending with the authorities, including temple trust board and the Vijayawada Municipal Corporation VMC The VMC decided to implement the plastic ban at Durga temple almost seven years ago along with other places in the city but no action has been taken in this regard so far

Vijayawada: The proposal for banning plastic in Durga temple is still pending with the authorities, including temple trust board and the Vijayawada Municipal Corporation (VMC). The VMC decided to implement the plastic ban at Durga temple almost seven years ago along with other places in the city but no action has been taken in this regard so far.

The Durga temple is the second biggest temple in the State after the Tirumala Tirupati Devasthanam (TTD). Nearly 20,000 devotees visit the temple daily and the number of visitors touches one lakh on auspicious occasions. The temple income reached nearly Rs 200 crore per annum. The temple assumed significance from its proximity to AP’s new capital Amaravati. Hence, the visits of VIPs increased abnormally.

Similarly the shop vendors at the fifth floor of Raja Gopuram in the temple complex are selling puja items including coconut, turmeric, Kumkum, sarees, banana, prasadams, bangles, flowers and various other items in plastic covers. Some items are sold as sets packed in plastic carry bags.

Besides, the temple administration is also using small size covers for selling laddu and pulihora prasadams. Nearly one lakh covers are being utilised for this purpose. But the officials contend that 50 microns covers are permitted by the Pollution Control Board.

Temple stores in-charge N Ramesh speaking to The Hans India, said that the covers are not harmful. He said that the prasadam covers are biodegradable and allowed by the Pollution Control Board. The temple is using covers weighing nearly 100 kg per day.

Apart from this, the devotees are carrying covers in the ratio of at least one in four devotes on an average. Nearly 5,000 to 10,000 covers are being carried to temple premises on Indrakeeladri every day. Now all the bags are being collected and shifted to dumping yard.

Trust Board member Kodela Suryalatha said that she had proposed plastic ban at the trust board meeting last January. She said that the plastic ban is important for protecting environment.

Another Board member Pamarthi Vijay Kishore said that the plastic ban might be implemented from next month. He said that the members already raised the issue and it would be in the agenda in the next board meeting.

Trust Board member Chanumolu Samba Suseela said that the Sabarimala Ayyappa temple in Kerala also had already banned plastic covers on temple premises. She also said that there is need to implement plastic ban in Durga temple.

Board member G Padma Sekhar said that paper availability to replace plastic covers is important. It is the reason behind the delay in implementing plastic ban in the temple, he said.

S Mallikarjuna Rao, a Guru swami of Ayyappa devotees and who participates in seva at Durga temple, said the devotees should follow the guidelines of temple administration. He said that the Guru swamis would also create awareness among them, once plastic ban is announced in Durga temple.

Shanka Sandilya, Durga temple Vaidic committee member and one of the founders of Bhavani Maala in 1980s, said that the devotees especially Maladharana persons should follow the instructions of Guru swami. He said that he would create awareness on the harm plastic covers causes, after announcement of ban officially by temple authorities.