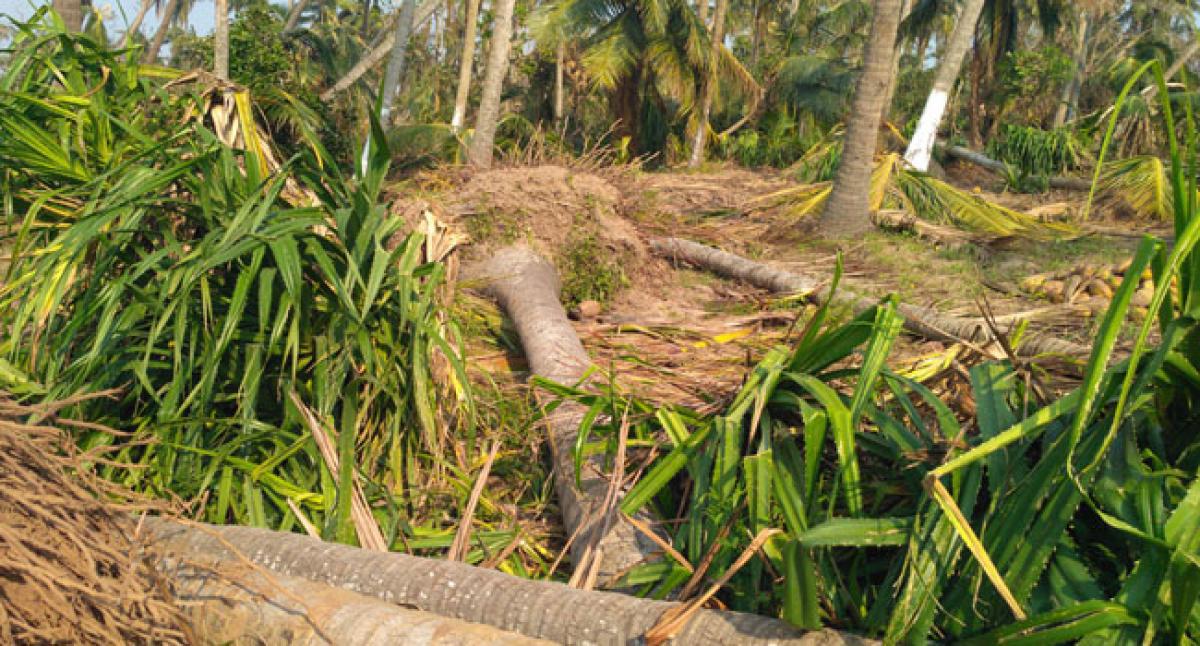 After severe cyclonic storm Titli hit the Srikakulam district, the farmers in Uddanam area are opting for migration to feed their families Uddanam area covers seven mandals, Itchapuram, Kaviti, Kanchili, Sompeta, Mandasa, Palasa and Vajrapukotturu and these are located adjacent to the sea coast

Srikakulam: After severe cyclonic storm Titli hit the Srikakulam district, the farmers in Uddanam area are opting for migration to feed their families. Uddanam area covers seven mandals, Itchapuram, Kaviti, Kanchili, Sompeta, Mandasa, Palasa and Vajrapukotturu and these are located adjacent to the sea coast.

The farmers in these mandals have lost their coconut, cashew, mango plantations and other crops due to cyclone. The horticulture crops are damaged totally in an extent of 1.02 lakh acres in these mandals. In Kaviti and Kanchili mandals, coconut plantations suffered heavy damage.

In Mandasa, Palasa and Vajrapukotturu mandals, cashewnut plantations and drumstick trees were completely damaged due to cyclone. Unlike other crops, coconut and cashew plantations need more period for its revival.

Normally, to grow a cashew tree till harvesting stage, at least eight years will be required. For coconut tree, minimum ten years is required to get yield. If a farmer lost his paddy crop, he can overcome the loss for some extent in next season.

But cashew and coconut farmers have no option. Same period is required for mango plantations also. Drumstick crop is also required more than four years to get yield. “We have invested lakhs of rupees on coconut plantations and now, we lost it due to cyclone.

For revival at least ten years is required. Till then we need some amount for investment and to run our families and childrens’ education,” coconut farmers, Gondyala Ramamurthy of Bejjiputtuga, Yenni Devaraju of Chandiputtuga villages in Kaviti mandal said. Rammurthy lost coconut in five acres and Devaraju lost coconut in six acres. “We are planning to migrate to other areas for earning to run our families,” they said.

“Cashew crop needs more investment and removal of damaged plantations is a big task for us and we have to wait another eight years to get yield,” cashew farmers Seepana Venkata Ramana of Byripuram and Borra Appala Raju of Bejjiputtuga villages said.