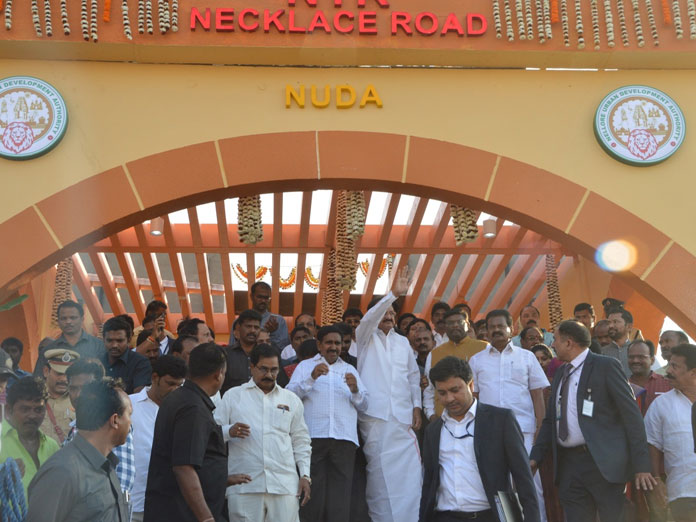 The VicePresident of India Muppavarapu Venkaiah Naidu appealed to the political leaders, irrespective of their affiliation, to participate in development process of the city He, along with the Municipal Administration Minister P Narayana, inaugurated NTR Necklace Road here on Wednesday

Nellore: The Vice-President of India Muppavarapu Venkaiah Naidu appealed to the political leaders, irrespective of their affiliation, to participate in development process of the city. He, along with the Municipal Administration Minister P Narayana, inaugurated NTR Necklace Road here on Wednesday.

The Vice-President allocated significant time for explaining about funds sanctioned for the district headquarters during his tenure as Union Minister. He said city development took place in accordance with the plan, Nellore Next, designed and developed by his daughter Deepa Venkat.

Addressing the gathering, Venkaiah stated that industrialists and city residents have participated and discussed earlier about development of Nellore during ‘Nellore Next’ debate. He appreciated efforts of the politicians and district administration for implementing the plan vision in an excellent manner.

‘I was earlier feeling worried about sorry status of social infrastructure and basic amenities in the city. Now, I am very happy for excellent development according to the vision of daughter Deepa Venkat, who had formed ‘Nellore Next’ for a holistic development of the city.

I have sanctioned funds during my regime as Union Minister,’ said Venkaiah Naidu. He listed tens of projects that have been sanctioned by the Centre till now. He said Rs 250 crore for setting up National Institute of Ocean Technology in the district, Rs 35 crore for the National Institute of Tourism and Travel Management (NITTM); Rs 250 crore for NCERT at Chowtapalem and Rs 25 crore sanctioned for Kamadhenu Project at Chintaladevi village in Kondapuram mandal.

He stated Rs 150 crore have been sanctioned under AMRUT scheme for various development activities in Nellore city. Venkaiah further said a common facility centre for goldsmiths and Rs 25 crore was sanctioned for setting up a training centre for physically challenged.

Also, textile park at Venkatagiri, Rs 1,360 crore for Sagaramala Project including Krishnapatnam-Obulavaripalli project, Skill Development Centre at Saraswathi Nagar in Venkatachalam mandal with Rs 5 crore, Sports Complex at Mogallapalem, 10 Tourism Projects worth Rs 54 crore under Swadeshi Darshan programme; 20,681 houses for the poor under Housing For All scheme for the district were amongst them, he explained.

Naidu said that 11.3 lakh houses were sanctioned to the State when 75 lakh houses have been allocated to the entire country. Central government had allocated additional funds for Nadikudi-Srikalahasti railway line, Passport Seva Kendra in the city, and school building for Kendriya Vidyalaya at Kavali. Krishnapatnam Port is also included in the Chennai-Bengaluru industrial corridor to provide employment, he added.

Venkaiah Naidu also said that there is a responsibility on district administration and political leaders to monitor and complete the development activities. He said there a need to focus on sanitation in the city limits for attracting sightseers and others, who visit the city. He stated one should not forget development of the city wherever he is and what position he achieves.