Yuvi's custom KTM to be auctioned Yuvi\'s custom KTM to be auctioned. First showcased at the 2015 India Bike Week in February, Yuvraj Singh\'s YouWeCan X-12 Custom Motorcycle - based on the KTM Duke 390 - will be up for auction soon. The bike was customised by a Pune-based firm - Autologue Design.

First showcased at the 2015 India Bike Week in February, Yuvraj Singh's YouWeCan X-12 Custom Motorcycle - based on the KTM Duke 390 - will be up for auction soon. The bike was customised by a Pune-based firm - Autologue Design. 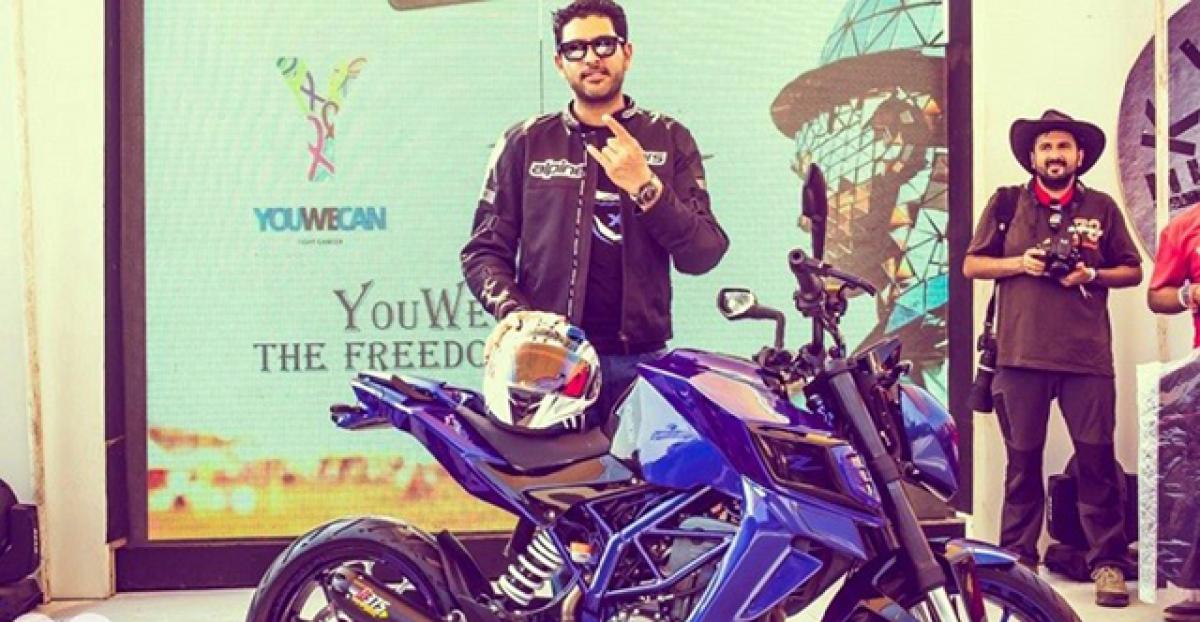 The money to be received through auction will be used for Yuvraj Singh's YouWeCan cancer awareness campaigns. The Pune-based custom company also launched the YouWeCan bike kit at a special price of Rs. 49,390.

Moreover, the brand has also announced the launch of limited edition KTM Duke X-26 and X-12 custom kits which can be installed on to both Duke 200 and 390 without making any modifications to the chassis or drilling a hole. The company informs that these kits were developed using chassis scanning, CNC machined patterns, 3D modeling, Woven Mat FRP and Standox 3 coat painting.

Yuvraj said "My first big bike was custom made into a street fighter by Autologue. I just loved their capabilities to design and build custom kits, and was sure that the YouWeCan bike had to be built by Autologue. The idea of a custom kit really appealed to me as it would remain a unique style statement despite several people adding it on their bikes.

I love the way the YouWeCan bike has turned out and have plans to be more actively involved with Autologue in future" Mukul Nanda, head - Autologue Design said "By offering X26 and the X12 kits Autologue Design has demonstrated the potential of customizing a KTM duke 200/390 bike into a unique street fighter.

This can be extended to bikes other than KTM. We would like these kits to be available throughout the country, so looking for some potential partners as well. Unlike other one-off modification jobs, our customization kits are built by taking the OEM design route e.g.

Chassis Scanning, 3D Modeling, CNC machined Patterns, Woven Mat FRP and Standox 3 coat Painting. Consequently it is a bolt-on plug and play kit requiring no alterations to the original bike frame, no drilling of holes and weighs up to 5 kgs only."