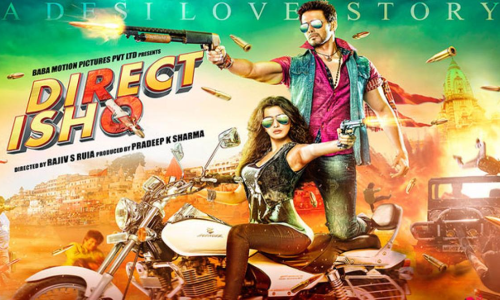 Directed by Rajiv S Ruia, \'Direct Ishq\' is the story of the fearless Pandit Rajneesh Duggal who is in love with the super-daring and music enthusiast Nidhi Subbaih.

Directed by Rajiv S Ruia, 'Direct Ishq' is the story of the fearless Pandit Rajneesh Duggal who is in love with the super-daring and music enthusiast Nidhi Subbaih. Nidhi, however, is all set to tie the knot with the naive Arjun Bijlani. Loaded with catchy one-liners and impressive stunts- especially Nidhi's cartwheel stunt over the jeep has done a good job and will entertained the audience.

The story is all about a bhai Vicky Shukla (Rajneesh Duggal) from Benaras and a tomboy fall for the same girl. The only difference is the girl, Dolly Pandey (Nidhi Subbaiah), is a firebrand who wants to establish herself as a leading Indian rockstar. Kabeer (Arjun Bijlani) helps her for his own interests but eventually falls for her. However, the bhai, Vicky Shukla is sure of his love and goes behind her to Mumbai to marry her. Will Dolly choose Vicky or Kabeer is what it is all about? It is a romantic story with loud characters. The entire tone of the film is a masala one and it stays true to that sentiment.

Direct Ishq is a rom-com masala film that's full of romance, comedy and action and with beautiful songs. Rehguzar and Duwa Mein are two great tracks. The cinematographer has caught Benaras from a touristy perspective.

Rajneesh Duggal has prove that he is the boy next door in the Bollywood in the movie he is a rough and tough strong & bold boy who always keeps a revolver with him, as he is always ready to fight the enemies.

Nidhi Subbaiah named as Dolly Pandey, has done justice to his work as he plays a girl who looks like a doll- naughty but active. She is wise and very bold, who doesn't allow any boy to come near her. Her dream is to become a very big singer & wants her father & the whole city to be proud of her.

And on the other hand Arjun Bijlani who is debuting not able to show his acting skill so far where portrays kabeer who is a smart, good looking guy born in a rich family of Banaras but educated in Mumbai and who does music shows and events in Mumbai.

Director Rajiv S Ruia has showcased all the Benaras element and never give you a chance to skip the moment.

Overall, this is a fairly enjoyable film.