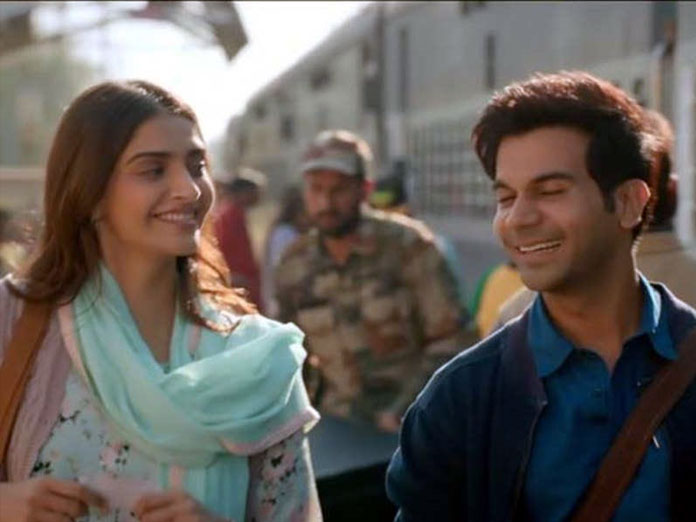 Actor Rajkummar Rao who next will be seen in Ek Ladki Ko Dekha To Aisa Laga, has said that his forthcoming film will really good message to the audience along with entertainment

Actor Rajkummar Rao who next will be seen in ‘Ek Ladki Ko Dekha To Aisa Laga’, has said that his forthcoming film will really good message to the audience along with entertainment.

Rajkummar Rao was interacting with the media at the special screening of ‘Ek Ladki Ko Dekha To Aisa Laga’ along with R. Balki, Masaba Gupta, Fatima Sana Shaikh, Sonam Kapoor, Raj Nidimoru and Krishna D.K. on Tuesday in Mumbai.

‘Ek Ladki Ko Dekha Toh Aisa Laga’s trailer has been widely acknowledged by the audience as it talks about same-sex relationship issue which is still taboo in India. Sonam Kapoor represents LGBT community in the film.

Talking about the film R. Balki said, “It’s very special film and it has been made beautifully. I think it’s one of the important films done in a way that is absolutely right for the audience so, they must see it.”

When asked Balki whether it’s a challenge or a risk for a filmmaker to make film on same-sex relationship, he said, “It’s not a risk or a challenge and it’s not out of the box. It’s just a film that has to be done and it has done so intelligently by Shelly Chopra Dhar so, hat’s off to her and hat’s off to all the actors who are acting in the film so naturally and effortlessly.”

Talking about the film Fatima Sana Shaikh said, “It’s a lovely film. I hope people will go and watch this film because this film can change the mindset of them. Out of 10 people if it changes perception of one person about the issue then, it will be a success of this film.”

It features Sonam Kapoor, Anil Kapoor, Rajkummar Rao and Juhi Chawla, the film is slated to release on 1st February 2019.