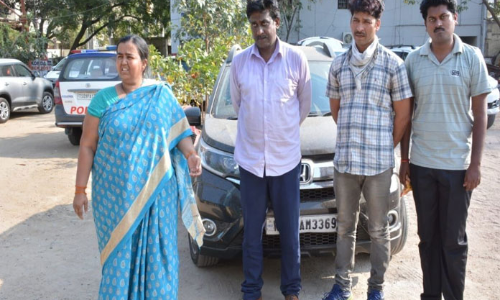 Hyderabad: The Malkajgiri Special Operations Team (SOT) along with the Uppal police on Wednesday busted an interstate fake job consultancy racket and arrested four persons including a woman for duping job aspirants to the tune of Rs 3 to Rs 4 crore. The police seized net cash of Rs 10.5 lakh, seven tolas gold ornaments, car worth Rs 15 lakh, three laptops, one colour printer, six mobile phones, fake appointment letters and sale deed agreement copy of purchased flats at Kolkata all worth Rs 35 lakh from the possession of the accused.

The arrested issued fake appointment letters and escaped by switching off their mobiles and by closing the training centre at Kolkata. The main accused Kalu Charan Panda received total amount of Rs 1.5 crore towards his share amount and from which he has purchased costly flats in Kolkata, car, gold ornaments, house hold articles and spent the money lavishly.