It’s high time for all Indians to stand together 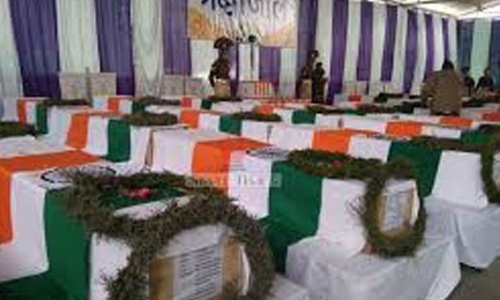 Indias relentless diplomatic pursuit against Pakistan and its Statesponsored and trained terror modules, following the deadly Pulwama attack that claimed nearly two score lives of the Indian paramilitary force personnel, and the subsequent resolve of the Indian government to corner Pakistan on international fora, succeeded in getting the United Nations Security Councils assent to condemn the at

India’s relentless diplomatic pursuit against Pakistan and its State-sponsored and trained terror modules, following the deadly Pulwama attack that claimed nearly two score lives of the Indian paramilitary force personnel, and the subsequent resolve of the Indian government to corner Pakistan on international fora, succeeded in getting the United Nations Security Council's assent to condemn the attack naming Jaish-e-Mohammad specifically.

This happened despite China's dilly-dallying and its pressure for 'more time to consider' before moving on vis a vis JeM. Finally, it had to back the resolution. Simultaneously, France is working to get the JeM ostracise in the world. This is the first ever time in decades that India has taken a decisive action moving variously on various counts. It has also gone ahead and decided to stop excess water flow into Pakistan from is rivers - which was always a humanitarian consideration of India - which could go a long way in hurting it far deeper.

Our waters were always flowing with our martyrs’ blood into Pakistan. Mercifully, India has not looked towards the international community for its approval in taking the step now to stop waters flow. Whether this would lead to flooding of Jammu and Kashmir and Punjab is a different issue. Yes, there will be a problem in this regard as India has not gone ahead and built the required canal system. But it can start expressly on the work now and supply the water to the parched lands of India elsewhere.

However, Indian response to Pakistan, which is well calibrated and coordinated while showing full restraint yet getting all the pieces right on the board, has rattled Pakistan fully. This could be stated so because of its directive to its civilian and military authorities to move people away from the borders in sensitive areas and into bunkers. It has also moved its terror launch pads away from the forward positions and into the security ring of its military.

The fact that UNSC has come together to condemn the attack and also name JeM strongly in its resolution is a telling proof of JeM's role in the Pulwama attack. Unfortunately, there are disgruntled voices within India, mainly from the Opposition, which are questioning the dastardly attack and trying to pin the 'blame' on Prime Minister, Narendra Modi. For these voices highlighting Pakistan Prime Minister Imran Khan's statement as a valid proof of Pak's non-involvement to put the blame on Modi, the resolution should be an eye-opener.

But then this is an election year and such things are only expected in the country. Anyway, one should not read too much into the Opposition charge as none can question its wisdom or patriotism. It is the heat of elections and the attempts by the ruling party to politicise the issue that make the Opposition say so. Now that the international community has come forward, including China, in condemning Pakistan and JeM together for the attack, let us all come together and rest our bitterness a while for the sake of our nation. Together let us try to save our soldiers’ lives and protect our borders.