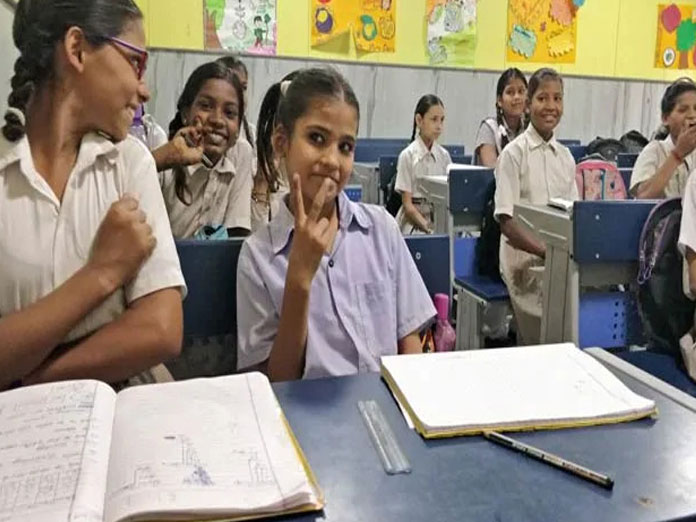 New Delhi: Schools run by Delhi government have had a makeover which few thought was possible. When the Aam Aadmi Party (AAP) came to power in February 2015 it made a pledge to bring about far-reaching changes in the education and health sectors.

That change is visible in the nearly 1,000 government schools in the city. The classrooms are cleaner with colourful walls and comfortable benches. Many senior classes boast of projectors, smart boards and air-conditioned labs besides indoor and outdoor sports facilities.
Some schools have lifts and swimming pools -- a luxury lacking in many private schools.

Government schools run by the Delhi government were not always like this. Most had worn out buildings, battered furniture and lacked proper water, toilet and sports facilities.

One such school inside the IARI Pusa campus underwent a makeover after AAP came to power in 2015. It received a facelift under a pilot project along with 53 other schools.

For many people in the area, the three-storey school building is now better than many private schools. The main door and the boundary wall are painted with colourful pictures. There are new and spacious benches for students.

"I have been a teacher in this school since 2007. I have seen the transformation in recent years. The school earlier had around 20 rooms but now the number is 78 with labs and a multi-purpose hall. There are ACs in labs and children are happy with the changes," he said but requested that his name not be used.

Atishi, a former advisor to Education Minister Manish Sisodia and now set to be the AAP candidate for the Lok Sabha election from East Delhi, explained how the government initiated the infrastructure reforms. Talking about the earlier times, she said: "Multiple classes were conducted in a single room. Students were forced to sit on the floor due to lack of benches. The walls were in a bad condition. There was a lack of proper toilets and water availability." The government said it would build 21,000 new classrooms in four years. Atishi said that despite years of rift with the Lt. Governor, 8,000 were constructed and work on 13,000 was going on.

A total of 25 new schools have come up while 31 are under construction. Most people credit this turnaround to Chief Minister Arvind Kejriwal and his deputy Sisodia, who says that besides infrastructural changes he is determined to improve the quality of education.

"We focused on infrastructure and also on the training of school principals and teachers to bridge the existing learning gap in the system," Atishi told IANS. Many teachers were sent abroad for training -- something that had never been done earlier.

Last year, the Delhi government conducted 'Mission Buniyaad' campaign during the summer holidays to help students studying between Classes III and IX who were not up to the mark due to the nationwide no-detention policy. The government has launched a Happiness Curriculum, claiming it will turn students against corruption, violence, hatred and terrorism.

The curriculum, with focus on meditation and mental exercise, includes mindfulness practice, gratitude, morals and value based stories and activities involving about eight lakh students. The government says it will develop an activity-based curriculum to inculcate habits of cleanliness and hygiene among the students.

The government is set to launch an 'Entrepreneurship Curriculum' from the next academic session under which students of Class 9 and above will be trained to opt for entrepreneurship. And in a first of its kind initiative in government schools, the AAP government started organising Parent Teacher Meetings in a big way.

This has really helped, said another teacher who too requested anonymity. "Children need little more care and attention as they are from economically weaker sections and cannot afford private tuitions," said the teacher.

Education has always been a priority in the AAP government budgets. In 2018-19 it claimed 26 per cent of the total. Raju Yadav, owner of a small shop in Laxmi Nagar in east Delhi, is happy that his daughter is studying in a school with good facilities.

"My wife and I are not educated. My daughter is in Class III. When I see the dramatic changes in the school, the AC, the playing area, everything, I feel very happy." Added Roshan Lal, 40, a rickshaw puller: "My son is now very fond of going to school. Not just that. When he comes home, he teaches me a few things as well. We are indeed blessed."