The nervous system and the brain 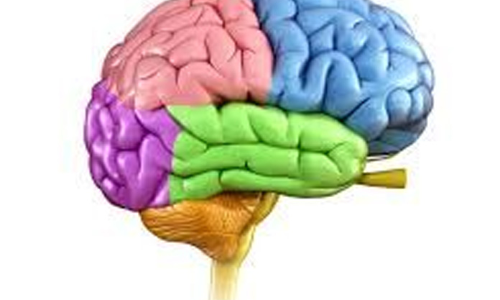 The brain of an average-sized adult weighs about three pounds, yet the amount of information it contains is amazing! The cerebrum—the large, upper part of the brain—orchestrates memory, thought, and learned behavior. The cerebrum’s surface is called the cerebral cortex, and is convoluted—patterned with intricate twists. The cerebellum—the underneath part of the brain—coordinates voluntary muscle action and balance. The brain stem connects to the spinal cord and controls involuntary activities.

The cerebrum is divided into two hemispheres, or halves, which are connected by a communication bridge called the corpus callosum. Each hemisphere controls the actions of the opposite side of the body. In human brains and some animal brains, there are certain specific skills that are controlled by each hemisphere. In human brains, the left hemisphere controls temporal (time) judging skills, rhythm processing, mathematics skills, and both spoken and written language skills. The right hemisphere controls pattern-matching, hand-eye coordination, facial recognition, non-speech-sound processing, and music skills. Logic or artistic ability can be on either side, depending on which skills a person is strongest in.

Experiments and research have been done which demonstrate where certain thought activities take place. The split-brain phenomenais an indicator of which skills are located in each hemisphere. Split-brain patients have had their corpus callosum severed, usually to cure epileptic seizures. This means that the two hemispheres can no longer communicate with each other. Research on split-brain patients has shown that what the right hemisphere knows can only be communicated non-linguistically—without using written or spoken language. However, what the left hemisphere knows can be expressed using language, indicating that language skills are contained in the left hemisphere.

Nerve cells, called neurons, are the communications cells of the nervous system. Hair-like tentacles, called dendrites, that extend from the cell body, are the neuron’s receivers. The axon, a tail-like structure on the cell body, is the neuron’s transmitter. The synapseis the connection point between two neurons or a neuron and a muscle or gland cell.

Have your child hold his thumb and index finger two inches apart while you drop a ruler to fall between them. The distance the ruler falls before he stops it with his thumb and finger indicates his reaction time. Repeat three to four times with each child. Record the results. Try the experiment again while the child recites addition or multiplication facts. Compare the results, and explain that our reaction time increases when we are distracted.