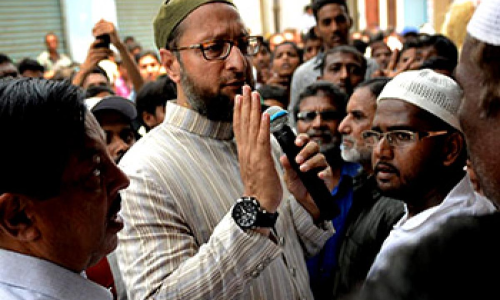 Two top Congress leaders party were injured in an attack by MIM workers in the old city here during elections to the Greater Hyderabad Municipal Corporation on Tuesday.

Hyderabad: Two top Congress leaders party were injured in an attack by MIM workers in the old city here during elections to the Greater Hyderabad Municipal Corporation on Tuesday.

Shabbir sustained injuries including one near his eye. The attack took place in the presence of Majlis-e-Ittehadul Muslimeen (MIM) president and Hyderabad MP Asaduddin Owaisi, who had reached the police station to protest presence of the Congress leaders.

The incident led to tension in the area. Congress leaders led by Uttam Kumar Reddy later marched to the office of director general of police and staged a sit-in, demanding Owaisi's arrest.

The Congress leader demanded repolling in all divisions in the old city. He alleged that MIM in collusion with the ruling Telangana Rashtra Samithi (TRS) rigged the elections.

Trouble began after the Congress leaders came to the Mirchowk police station to demand release of party leader Mohammed Ghouse, who was earlier arrested in Khilwat area.

Ghouse, who recently resigned from the MIM to join the Congress, and MIM leader and Charminar legislator Ahmed Pasha Khadri were arrested in Khilwat when they clashed near a polling station after accusing each other of influencing voters.