When celebs showed us the finger 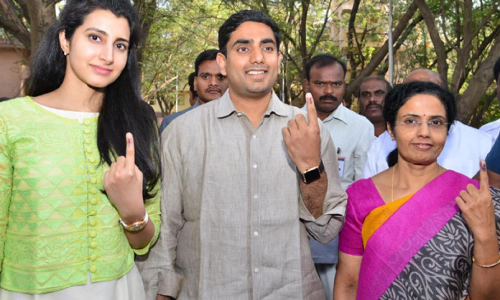 Celebrities came out to vote in the elections to Greater Hyderabad Municipal Corporation (GHMC) and appealed to urban voters to participate in the poll process.

Leading Telugu actors like Balakrishna, Junior NTR, Nagarjuna and Allu Arjun cast their votes at polling centres in the posh Jubliee Hills area. Nagarjuna accompanied by his actress wife Amla cast their votes. They appealed to people to come out of their houses and exercise their franchise.

"Majority of the voters are youth. They often complain that they lack amenities. They should come out and vote to elect good representatives," said Nagarjuna. To a query, Nagarjuna said his actor son Akhil's name is missing from the voters' list. Veteran actor Balakrishna, son of Telugu Desam Party (TDP) founder N.T. Rama Rao, also cast his vote at a polling booth in Jubliee Hills.

Brother-in-law of TDP president and Andhra Pradesh Chief Minister N. Chandrababu Naidu, he is a member of Andhra Pradesh assembly. Balakrishna's daughter Brahmini, who is married to Naidu's son Lokesh, also cast her vote. She was accompanied by Lokesh and her mother-in-law Bhuvaneswari.

Balakrishna's nephew and popular actor Junior NTR and his wife cast their votes. "Please be responsible citizens and vote. You can question only if you vote," Junior NTR told people. Young actor Allu Arjun too cast his vote. "Vote.. if you don't vote you don't have the right to complain," he tweeted.

Movie Artists' Association (MAA) president Rajender Prasad along with family members exercised their franchise. The polling in Hyderabad is often marked by voter's apathy. The turnover was less than 45 percent in GHMC elections in 2009.

The GHMC officials and state election commission conducted voter awareness programmes this time with the help of civil societies, NGOs and residents' welfare association with an aim to increase the polling by 20 percent.