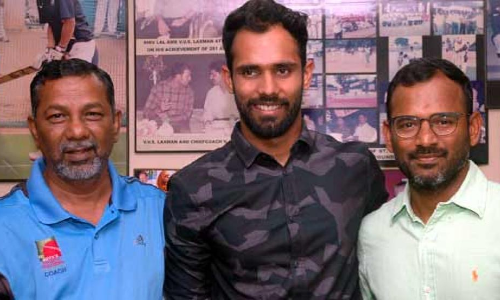 Secunderabad: Emotions ran high when Hyderabad’s latest gift to the world of Test Cricket took spotlight at a colourfully organised felicitation held for him at the very place from where he learnt the basics of the gentleman’s game.

Not ironically present on the occasion were all those who have played a stellar role in shaping up the career of the prodigiously gifted all-rounder, whose emergence has been among the few positives from what has been a nightmarish away Test series for Team India against England.

There is no denying that in G Hanuma Vihari, India finds a new beacon of hope, who has managed to hold on in an immensely talented batting line-up that is the envy of the world.

It is a good augury that his cricketing alma mater St John’s Cricket Academy honoured him with a felicitation that he will cherish for a lifetime.

In retrospection, Vihari will notice that each of the speakers actually have placed additional responsibility on his shoulders by insisting that his ‘journey has just about commenced,’

Sandwiched in their praise were words of caution by all those who helped him rise to the status he now enjoys-from his mentor K John Manoj, Founder-Director of SJSCF, N Shivlal Yadav, and R Sridhar to V Chamundeshwarnath and Ravinder Reddy of Bharathi Cements, among others.

On his part, enamoured by the adulation that came straight-from-the-heart, the 24-year-old, who is presently helming Andhra in Ranji Trophy, showed that he has not forgotten his roots in his hour of glory.

His humbleness and disciplined upbringing came to the fore when he did not restrict his thanksgiving to John Sir or those at St Andrews School, which provided ‘the support system’.

He remembered the contribution of each and every coach at the Foundation, ‘who was available for me at even odd hours. I shall remain indebted to them,’ he said.

John Manoj set the tone for the evening when he recalled the time Nagesh Hammond had recommended the ‘hugely gifted youngster’ and the progress made by the ‘quality-obsessed’ Vihari as he evolved into a match-winning batsman and went on to become an all-rounder to form the backbone of any team that he was part.

‘Determination to go up the ladder was writ large on his face from the moment he was introduced to me, which is quite phenomenal considering that he had lost his father when he was just 12 years old and it was his doting mother (Vijayalakshmi) who exhorted him to let the game go on as she realised that he was a special child,’ remarked John.

Shivlal Yadav, who was specifically singled out by both John and Vihari for his role in the latter getting a berth in the Indian Under-19 World Cup, cautioned the young cricketer against getting carried away by the Test baptism.

‘Forget being a Hyderabad or Andhra player, you are now in Team India. Don’t rest on national colour laurels that mark the fulfillment of your dream. Remember that the real challenge begins hereafter. Pad up and perform consistently’ were his pearls of wisdom.

Meanwhile, the Academy gave a touching flourish to the well-organised two-hour programme by inviting Vihari’s mother and grandmother, who were visibly emotional at the celebration accorded to their child.

It was a refreshing change for one who ‘learnt a lot by watching (VVS) Laxman Sir working out at the nets here’ to himself being swarmed by delirious hopefuls seeking his autograph and giving him a guard of honour befitting an incredible son of the soil.

G Hanuma Vihari could not have asked for anything more motivational or inspirational than the toast that was raised in his honour by St John’s Cricket Academy!