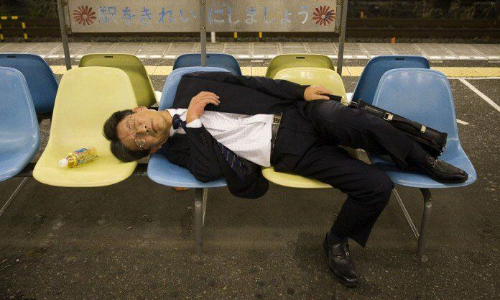 Companies in Japan are adopting different measures to counter an epidemic of sleeplessness that costs its economy an estimated 138 billion a year, a media report said on Tuesday

Companies in Japan are adopting different measures to counter an epidemic of sleeplessness that costs its economy an estimated $138 billion a year, a media report said on Tuesday.

Tech startups have been the quickest to address the "sleep debt" among irritable and unproductive employees, the Guardian report said.

Last year, Nextbeat, an IT service provider, set up two "strategic sleeping rooms" - one for men, the other for women - at its headquarters in Tokyo.

The aroma-infused rooms feature devices that block out background noise, allowing workers to stretch out on sofas for an undisturbed kip. Mobile phones, tablets and laptops are banned.

Nextbeat also asks employees to leave work by 9 p.m. and to refrain from doing excessive overtime, which has been blamed on a rising incidence of karoshi, or death from overwork.

Crazy, a wedding planning company, awards employees who sleep at least six hours a night with points that can then be exchanged for food in the company cafeteria.
Using an app to monitor their sleep, workers can accumulate points worth as much as 64,000 yen ($587) a year.

A survey conducted using fitness trackers in 28 countries found that Japanese men and women sleep, on average, just six hours and 35 minutes a night -- 45 minutes less than the international average -- making them the most sleep deprived of all.