Frontline voices: To be a transgender living with HIV in India 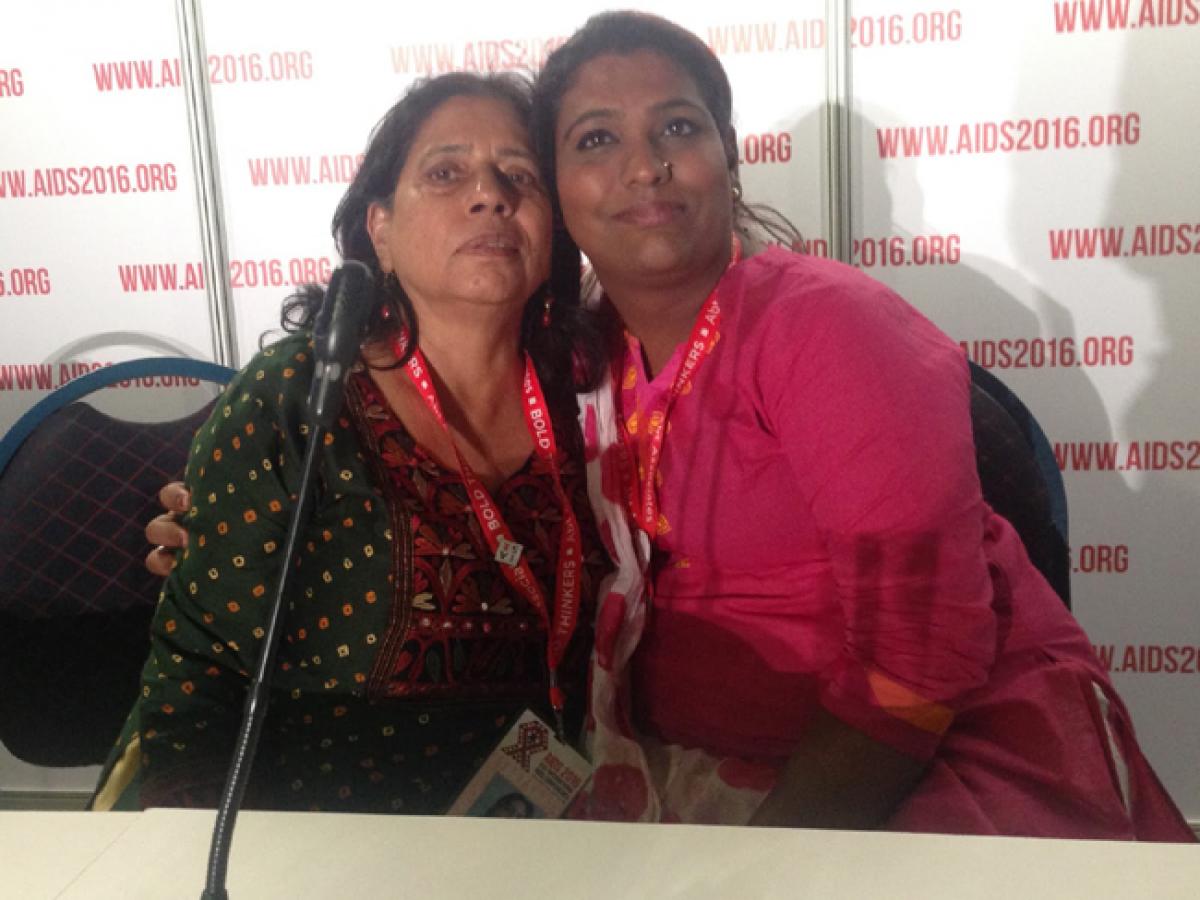 Armed with a management degree in marketing, Amruta Soni is currently working in Patna as the state programme manager at National Coalition of PLHIV in India (NCPI) for the Vihaan project in Bihar.

Armed with a management degree in marketing, Amruta Soni is currently working in Patna as the state programme manager at National Coalition of PLHIV in India (NCPI) for the Vihaan project in Bihar. Today she confidently handles 15 partner NGOs, providing them with technical support on how to implement the programme and link people living with HIV (PLHIV) with Vihaan care and support centres.

But the torturous path to her present enviable status has been drenched with tears and sweats; sexual abuse and violence.

Forced to fend for herself from the tender age of 16, Amruta has battled daunting odds to give herself an education and a life of dignity, while facing the double jeopardy of being a transgender as well as a PLHIV. Exuding infectious confidence and brimming with vitality, Amruta did not mince any words while narrating to me the downs and ups of her life when I met her recently during the 21st International AIDS conference held in Durban in July 2016.

Amruta spoke with CNS (Citizen News Service) and shared her story of courage, steely resolve and determination to overcome challenges – one after another – and bring a difference in lives of transgender and women in our community. Here is Amruta’s story in her own words:

"The youngest of three siblings, I was born in a Roman Catholic family of Solapur in Maharashtra. At the age of 16 when I had just passed Class 10, I was raped by my uncle. But the entire blame was put on me. My father asked me to leave the house - he said you cannot stay in the house as you are a transgender. So I was forced to move out with no economic support whatsoever. I got castrated and had my sex change surgery done to live with the Jogatha community. I am the first castrated Jogathi in the community to come out as a hijra (transgender) and live in society. As a Jogathi I was identified as God’s lady. I was taught the art of helping with various temple chores - performing the aarti and worshipping the gods - and in return take whatever alms the people gave. Still, shopkeepers would catch my hand and pull me inside offering me 5 rupees for having sex with them. But those measly 5 rupees were important for me at that time to keep me alive. Simply sitting at the temple was not getting me any money.

After some time I felt the need to move on. I wanted to study and prove my worth as a human being. My mother, who has been my inspiration, thought that if I made something of myself, my family would accept me. A friend motivated me to complete Class 12 from Indira Gandhi National Open University (IGNOU). Then I did my graduation from Jamia Millia Islamia College in Delhi. I stayed outside Okhla hospital in Delhi. I would fill over 10-20 buckets of water every morning for a tea-stall owner just for one cup of tea in return. I would sleep on a hospital bench at night. I often disguised my identity and dressed like a man to stay safe. Under such trying conditions I completed my education. Later I did MBA in marketing from Symbiosis Institute. HIV was given as a gift to me by society. I had no employment and no one else to take care of my shelter, food, and education. So I had no option but to do sex work. During this period, I contracted HIV, which was diagnosed in 2012 when I was once taken to the hospital as a rape survivor. Even though I did not have the courage at that time to reveal my positive status, I stopped doing sex work as soon as my positive status was confirmed. I got myself registered at an ART centre in Maharashtra, despite the counsellor advising me not to do so, saying that I would not live beyond 6 months. But I persisted and here I am today.

There was, and still is, a lot of stigma with PLHIV, along with transphobia. My mother had to abandon me because of societal pressure so that my other siblings could lead a normal life and not be pestered (as they were) with questions like - Is your brother a hijra? Trans women living with HIV in India face double stigma - of being a hijra and a PLHIV. They often hide their status for fear of not being able to earn a living. I too was scared of losing my customers and my bread and butter if diagnosed with HIV, and hence avoided going for a diagnosis. Children born with HIV infection are discriminated and looked down upon for no fault of theirs. I have seen the plight of women living with HIV. Even when a woman gets infected through her husband, she is branded as a prostitute and held responsible for her husband’s status. She is often thrown out of her family and is unable to fight for her rights and social protection. I am still fighting to legally adopt my deceased brother’s 10-year-old son studying in Class 3, who has been under my care since he was two days old, as the Indian law does not permit transgenders to adopt a child.

There are many issues of PLHIV that still need to be addressed. We have very few care homes for children living with HIV (CLHIV) in India. There are no care homes for female PLHIVs. We pay money to please the deities in the temples. Why not donate that money for CLHIV instead? Where is the Skill India programme for the transgender community? Or for that matter for PLHIV? We have a Commission for Women, but not one for trans people. We are still struggling in very much the same way. There are cracks in our own social and healthcare system due to which trans people with HIV do not want to go to ART centres or continue with their medication. I have seen that some ART centres do not even have clean drinking water facility and/or a proper place for patients to sit. Lack of sanitation is breeding more co-infections. Doctors at ART centres too are often very insensitive towards the PLHIV and transgenders. There are no community coordinators, even though the positions are sanctioned on paper. In my own case, when I was taken to hospital for a check-up after being raped, the doctors called their trainees to show them how a vagina had been created in my body and how my breast implants looked - even as I bled and writhed in pain.

My compatriots and the female sex workers (FSWs) motivated me to be their voice and to work for the social rights and protection of PLHIV. Through my dint and hard work, I joined the Vihaan Project in November 2013. The project works towards improving the survival rate and quality of life of PLHIV, especially high-risk groups such as FSWs, transgenders, MSMs, and injecting drug users. My first major exposure under Vihaan came when I was sent for 8 days training for microfinance banking for female PLHIVs and FSWs at Madurai. Next, I got to work with UNDP for transgender mapping in India. I also worked in Chhattisgarh as an advocacy officer for Hindustan Latex Family Planning Promotion Trust. I made history in Chhattisgarh by being the first transgender to be appointed as Nodal Officer in the State AIDS Control Society in 2014. We convinced the government to introduce many new schemes for transgender PLHIV - like free transport from home to ART centres, getting cards under Antyodaya yojana, sanctioning loans of INR 25,000 - 50,000 at very low-interest rates to female PLHIVs (including sex workers), to start their own small businesses. We fought for female PLHIVs who were pregnant to deliver in hospitals and not in the loos, as used to happen in the past.

God made the man, man made money and money made man mad. If you are moneyed, society is behind you, else you are discarded by everyone. I got married to a guy who left me 10 years back. Now he wants to come back as he has found that I am leading a good life. But when I was in need of him he deserted me. Even my family did not accept me when I needed them. But now they love me and care for me as I have money and fame. Education has helped me a lot and so has my foster mother Abhina Aher since I met her in 2012. She has always pushed me to move ahead. It was she who encouraged me to reveal my HIV status, which I did in 2013 when I started working with Vihaan. I now encourage other female PLHIVs to do the same, in their own interest. I counsel their families and the local bodies, like village panchayats, to ensure that female PLHIVs are not thrown out of their houses. I am not fighting just for myself, or for my community of transgenders. I am fighting for the rights of women in general."

Amruta has proved, beyond doubt, that real empowerment is not about giving power, it is about taking power.