World powers talked deep into the night Saturday seeking to break a deadlock in marathon negotiations with Iran and strike a historic deal to rein in Tehran\'s nuclear ambitions.

World powers talked deep into the night Saturday seeking to break a deadlock in marathon negotiations with Iran and strike a historic deal to rein in Tehran's nuclear ambitions.

A new deadline for an agreement is looming on Monday, and both sides are asking how much longer busy ministers can clear their schedules to hunker down in Vienna as they seek to end a 13-year standoff with the Islamic republic. 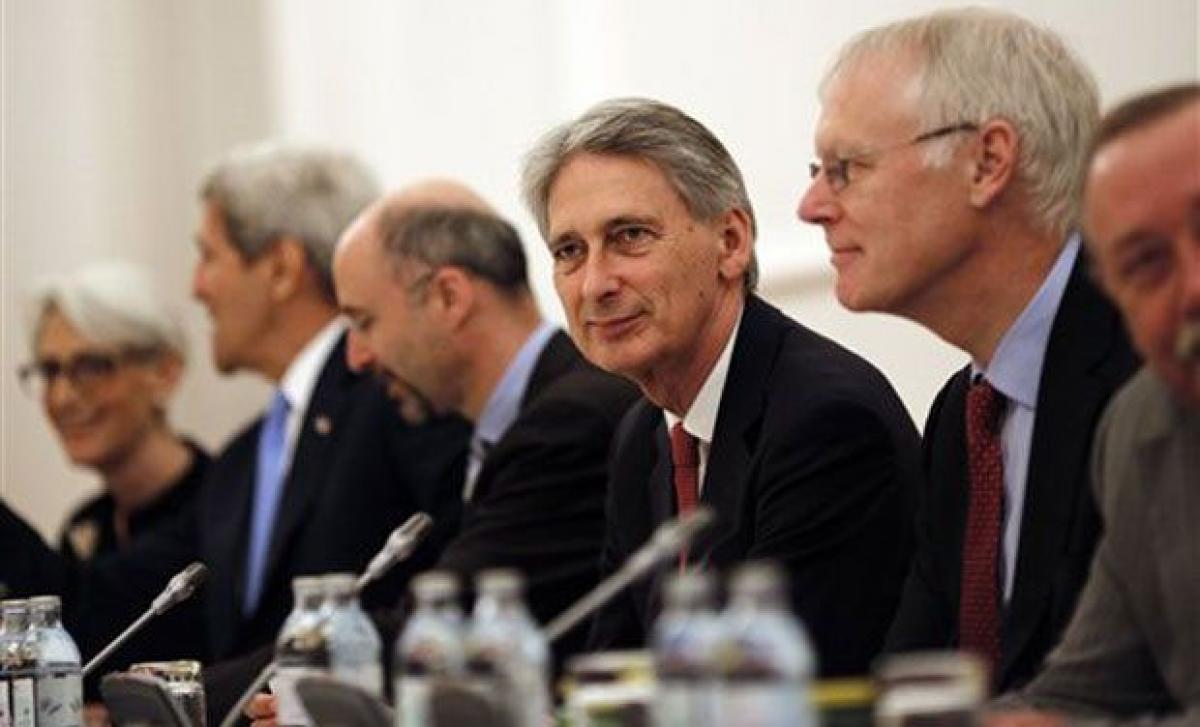 "Everything is on the table. It's now time to decide," French Foreign Minister Laurent Fabius warned on the 15th day of the tortuous talks.
Iran and the so-called P5+1 group, including Britain, China, France, Germany, Russia and the United States, are seeking to curtail Tehran's ability to develop nuclear weapons in exchange for relief from painful sanctions.
Three previous deadlines in this round of talks, June 30, July 7 and July 9 have already been missed and officials at the negotiations said sanctions and an arms embargo remain key sticking points.
"Ninety-eight percent of the text is finished," said a source close to the discussions after a flurry of bilateral and multilateral talks throughout Saturday.
Two or three important questions remained, however, including how long any agreement made in Vienna should last, and over the lifting of international sanctions on Iran such as a UN arms embargo, the source added.
"Now there needs to be a political decision. And if that is taken things could quickly" progress, the person said.
US Secretary of State John Kerry tweeted that there were still "difficult issues to resolve" after emerging from almost 90 minutes of talks with his Iranian counterpart Mohammad Javad Zarif and EU foreign policy chief Federica Mogherini.
The three met again later in the evening, in between two meetings of the P5+1 group, which ended just before midnight. Kerry had spoken earlier by telephone with Russian Foreign Minister Sergei Lavrov, but it remained unclear when Lavrov would return to the Austrian capital.
Under the parameters of a framework deal reached in Lausanne in April, Iran is to slash the number of its centrifuges from more than 19,000 to just over 6,000 and cut its stocks of enriched uranium, which can be used to make a bomb, from more than seven tonnes to about 350 kilos (770 pounds).
The aim is to ensure that it would take Iran at least a year from an estimated two to three months currently to acquire enough fissile material to build a bomb. But for weeks experts have been wrangling over exactly how to implement the Lausanne guidelines.
The negotiations have also stumbled over demands that UN nuclear inspectors have access to military sites, to investigate suspicions Iran sought to develop nuclear weapons in the past, allegations Tehran categorically denies.
The terms of an interim accord agreed in November 2013 have been extended until Monday to give the negotiators more time to strike an accord. In Tehran, Iran's supreme leader Ayatollah Ali Khamenei said the battle against the "arrogance" of arch-foe the United States would continue.
"The US is perfect instance of Arrogance. Prepare yourselves for more fight against Arrogance," his English-language Twitter account quoted him as saying in a meeting with university students.
The toughest problems in the Iranian nuclear talks have been left to last, including a mechanism for lifting interlocking EU, US and UN sanctions. A new headache has emerged in recent days, with the Iranian delegation insisting that a UN arms embargo be lifted once a deal is reached. Expert Kelsey Davenport, from the Washington-based Arms Control Association think-tank, warned: "Now is not the time for brinksmanship or a hardening of positions."
"This is an historic moment and there could be serious repercussions if negotiators fail to seize this opportunity to get a good deal," she told AFP.
Show Full Article
Email ArticlePrint Article
More On