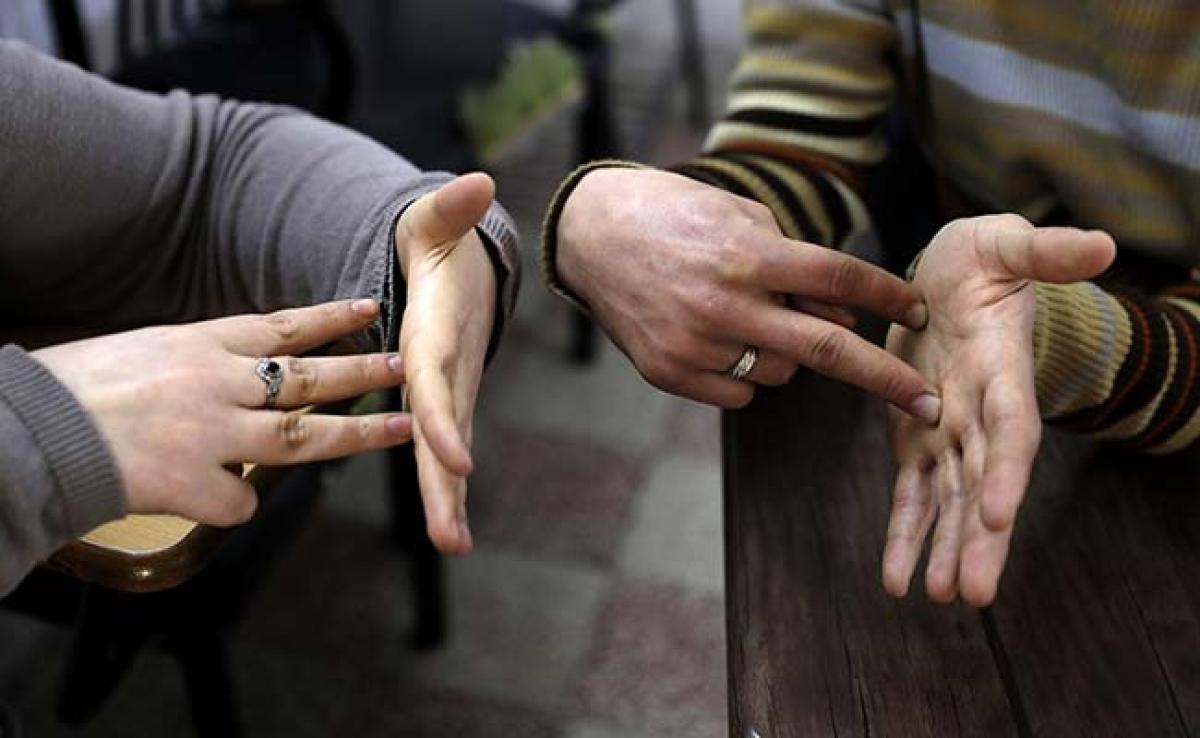 Twice raising the little finger represents \"I\" and placing a thumb on the index finger and the middle finger makes an \"S\" to signify ISIS, the terror group. At an NGO in Damascus, two young deaf Syrians, Bisher and Ryad, are working to create special sign language characters so thousands of Syrians like them can talk about the war that has ravaged their country for the past six years.

Twice raising the little finger represents "I" and placing a thumb on the index finger and the middle finger makes an "S" to signify ISIS, the terror group. At an NGO in Damascus, two young deaf Syrians, Bisher and Ryad, are working to create special sign language characters so thousands of Syrians like them can talk about the war that has ravaged their country for the past six years.

They have created a way to sign both the English word for the ISIS but also the acronym used for it in Arabic: Daesh.

To indicate the government, two fingers are placed on the palm, recalling the two stars on Syria's national flag.

But three fingers means the rebels, whose flag has an extra star. Two hands placed over the eyes signifies a kidnapping, explains 26-year-old biomedical engineer Wisal al-Ahdab, deputy head of the EEMAA association in the capital's Midan district.

"We had to invent words that didn't exist in the vocabulary of the deaf in Syria so they can exchange information and express their feelings about the violence," she says.

Once the new signs have been finalised and agreed on, video footage of them is taken and posted on Facebook so others who are similarly disabled can access and discuss them.

Officially, there are some 20,000 deaf people in Syria, but EEMAA chairman Ali Ekriem, a computer engineer, says the real number is five times that.

The 35-year-old says such people suffer double, living through a war without being able to make themselves understood.

'I saw my mother slump down'

The horror of incomprehension and ensuing realisation can be both dangerous and heart-breaking, says 21-year-old Ryad Hommos, who is helping to create the new signs.

While he and his family were fleeing fighting in their neighbourhood aboard a truck, sniper fire cut down his mother, uncle, aunt, three cousins, a brother and their baby sister.

But Hommos couldn't hear the shots ring out, and "because I wasn't expecting it, I didn't understand what was happening at first", he says.

"I saw my mother slump down and then my cousins fell. It was only when I saw my little sister's head explode that I finally realised we were under fire."

Another brother was later killed by shelling as he played football in the street.

Hommos now works in a cable factory, but remains haunted by the horror of what he has seen and dreams of going abroad.

Even navigating war-ravaged Syria on a day-to-day basis can be risky - like being stopped at one of the capital's many checkpoints.

"You have to make yourself understood using gestures, and often those in charge at roadblocks think we're mocking them," says Ekriem.

"Before, most deaf people avoided putting their disability on their ID cards, but now everyone does it to show at checkpoints."

While returning to her home in Damascus in 2011, she found herself stuck between anti-regime demonstrators and members of the security services planning to disperse them.

She tried to escape down an alleyway in the Midan neighbourhood, "but no one could help me because I could not communicate and the situation started to get worse".

By some miracle, Bisher explained her situation to a passerby and was taken to safety, but she is now so traumatised by the experience that she no longer dares to venture outside.

At home, her windowpanes rattle from bombardment outside as she recounts her experience.

In July 2012, rebels seized most of Midan before the army recaptured the district in a ferocious battle.

At the time, Bisher's mother told her to pack her things but did not explain that they were fleeing.

"Everyone was terribly nervous. They'd pull me in one direction then push me in another. No one talked to me, no one explained. They just wouldn't let me near the window," she says.

Bisher packed slowly, not understanding the urgency and angering her panicking family.

"My mother was treating me like I was stupid. I'm not stupid, but no one explains anything to me," she says.

The Ekreim family sought refuge in Lebanon for two years, coming back to what they say is a different Damascus.

The divisive sectarian rhetoric that has coloured much of Syria's war reached even the deaf association, and many of its Christians have left.

"The war blew everything apart," Bisher says sadly, describing the waves of emigration and saying even her friends had become "aggressive" towards one another.

"I hope one day we'll meet again, and that the deaf can find a shared language once more."