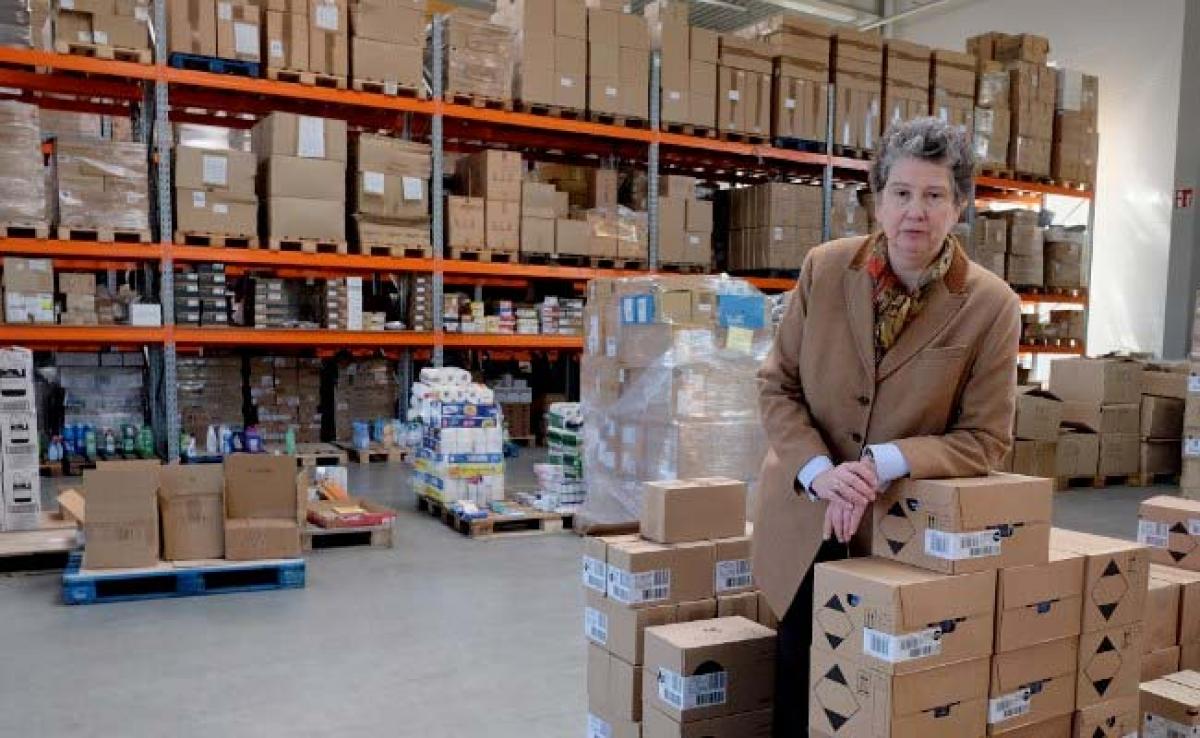 In a warehouse in the western Germany city of Cologne, bottles of deodorant and shower gel plastered with the face of football manager Joachim Loew are stacked all the way up to the ceiling.

In a warehouse in the western Germany city of Cologne, bottles of deodorant and shower gel plastered with the face of football manager Joachim Loew are stacked all the way up to the ceiling.

Whole pallets of the packages, a promotional offer for the Euro 2016 tournament, were headed for the incinerators once the final whistle sounded, but non-profit group Innatura has saved them for charities.

Further east in Berlin, residents are leaving extra salad, yogurt or bread in common fridges sitting in inner courtyards for neighbours to help themselves, in another effort to cut down on wastage.

And the population is starting to think up new ways to change that.

Juliane Kronen of Innatura set up the cooperative four years ago, urging businesses to donate items that have to be removed from retailers' shelves for some reason or other.

The non-profit group then redistributes the bounty to charities around Germany for a small consideration of between five and 20 percent of the list price.

Such forms of giving are a relative novelty in Germany, where heavy regulation can make giving away excess stock an expensive chore.

"It's less expensive in Germany for a company to burn products than to give them away" due to a tax on donations, fumes Kronen, a lively 50-something entrepreneur sporting salt-and-pepper hair.

"Every year in Germany we burn or destroy seven billion euros' worth of products."

Bizarre relics of an economy powered by exports and consumer spending are everywhere in this Aladdin's cave.

In one corner lie boxes of deodorant sprays whose labels make them unsuitable for export since the European Union imposed sanctions on Russia over the Ukraine conflict.

Further on are double-extra-large packages of dishwasher tablets from a forgotten limited-time-only offer -- pulled from the shelves once the promotion was over.

Innatura has saved about 580 tonnes of products from the furnaces since Kronen founded the company four years ago, she calculates.

313 kilos thrown away each second

While organisations like Innatura are battling the tidal wave of perfectly usable items being thrown away and burned, others are working from the ground up to make the most of food that would otherwise be dumped.

Germans throw away more than 18 million tonnes of food every year, or 313 kilos (690 pounds) every single second, according to charity World Wide Fund for Nature (WWF).

Some 600 kilometres (375 miles) from Cologne, Berliner Fenja is making a small dent in that total as she opens the door of a clapped-out fridge in the courtyard of an apartment block in the northeastern Prenzlauer Berg district.

Once she's dropped off her chard vegetables and rocket leaf, Fenja posts the donation on the Foodsharing internet platform to let other users know about it -- as does neighbour Silvia, who has contributed a kilo of onions and some rosemary.

Anyone can now help themselves to the ingredients at this spot or one of the other 300 fridges and drop-off points that have sprung up around big German cities.

"We've managed to save more than 8,000 tonnes of food" over the five years the platform has been active, says co-founder Frank Bowinkelmann.

Any food is welcome, from yoghurts that might otherwise get thrown away before holidaymakers set off, to leftover rolls after a hard day's work at the bakery.

But "consumers aren't the only ones responsible" for addressing the shocking levels of waste in Western societies, Bowinkelmann argues.

Manufacturers and retailers sell flour by the kilo or potatoes by the sack to customers who likely only need a fraction of what they are buying.

"How many of those end up in the rubbish? Manufacturers have to evolve as well," he insists.

Foodsharing has "touched a sore spot" in society with its mission, Bowinkelmann is certain. "People are more and more conscious of the massive waste."