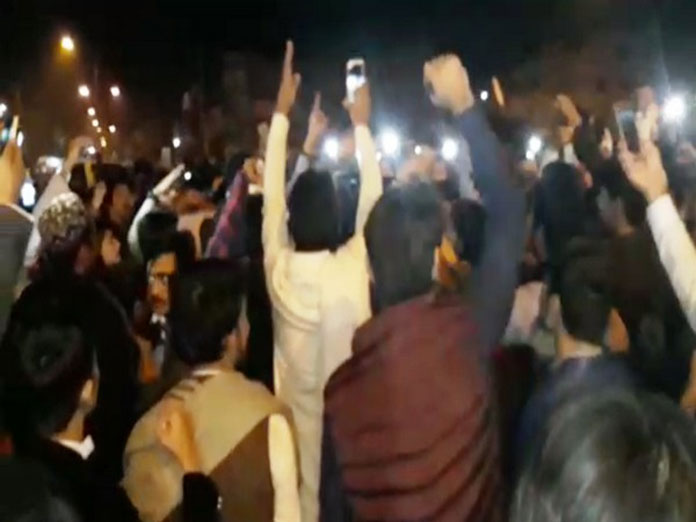 They gathered on January 5, in Germany, in Cologne, and again on January 12 in Tank in Khyber Pakhtunkhwa, to commemorate the first anniversary of Naqibullah Mehsuds death

Islamabad : They gathered on January 5, in Germany, in Cologne, and again on January 12 in Tank in Khyber Pakhtunkhwa, to commemorate the first anniversary of Naqibullah Mehsud's death.

It was to emphasize their determination to seek justice in a non-violent way for all the thousands and thousands of victims of the so-called anti-terrorist strategies carried out by the Pakistani government.

And, as happened throughout this year marked by protests against Islamabad, the Pakistani press could not or did not want to report the story.

The news, as happens more and more often in Pakistan, travels almost exclusively via the social media and tells the story of a country increasingly torn by discrimination and violence against most of its citizens.

Manzoor Ahmad Pashteen, leader of the Pashtun Tahafuz Movement (PTM), reiterates once more the requests of his fellow citizens.

The movement, born only a year ago, has grown and is growing bigger every day, taking to the streets, and gathering more people every day.

Pashtuns, obviously, but not the only people of different ethnicities and backgrounds that for months have been protesting against the government of Islamabad and, above all, against the real government of the country -- the Army.

The Pakistan Army is guilty of adopting against the ethnic Pashtun citizens the same strategies adopted over the years towards other ethnic and cultural groups -- exploitation of local resources to the advantage of the dominant Punjab, cultural colonization, radicalization of religious and social institutions.

This recipe led in the past to the birth of Bangladesh in 1971, and to the fifth separatist insurrection still going on in Balochistan.

In Sindh, it has led to the creation of political parties and ethnic-nationalist movements.

The history of Pashtuns is complex and closely intertwined with the history of occupations and regimes that took place in Afghanistan.

Border regions have been used from time to time as training camps and nurseries for jihadi, as battlefields for war-like actions against the 'bad' Taliban, as safe heavens for the 'good' Taliban', as factories for fake documents in order to send ISI spies to Afghanistan.

The local population has been suffering for years in silence. The community members have seen not only their houses, their markets and their villages crumble under the mortar shells of Pakistani Army, but also their social and cultural structures disappear.

The desperate attempts of Islamabad to convince the West of its "good faith", setting the region on fire, targeting mainly innocent civilians after relocating elsewhere their so-called "strategic assets", forced entire communities to flee their land and their houses.

But in addition to being devastated and looted, the Pashtuns began to undergo also through a systematic ethnic record throughout the rest of the country, and to be discriminated accordingly.

"We have been sacrificed for years on the altar of so-called strategic interests because of terrorist groups authorized to operate on our land. Our villages have been bombed and our people have been forced to abandon their homes in the name of counter-terrorism operations. Thousands of young people have been illegally detained or have simply disappeared.

"Many of our tribal leaders, many religious, political and student leaders have simply been murdered. The state has totally failed to prosecute those guilty of these crimes in the Fairies and neighboring regions inhabited by the Pashtuns, such as the Khyber Pakhtunhwa and Balochistan," says Manzoor Pashteen.

So, even in other regions of their own country, Pashtuns have been and are target of continuous discriminations and humiliations.

The inhabitants of Waziristan have been forced to use the so-called 'Watan' identity cards, which discriminate the bearer on the basis of ethnic and regional affiliation.

They are special identity cards, which must be approved and released by intelligence agencies and which make their owners subject to abuse and discrimination in the name of national security.

Any kind of people, political opponents, ordinary citizens, activists and intellectuals began to disappear or be killed in pretentious gunfire even though they never owned a weapon.

The ongoing protest started last February, when Naqeebullah Mehsud, an aspiring model with vague aspirations as a human rights activist, was killed in a false gunfight with the police.

It was the classic drop: for three days, hundreds of people staged a protest sit in Islamabad to seek justice, and thus the Pashtun Tahafuz Movement was born, which is now expanding across the border into Afghanistan.

The PTM accuses the army of using the tribal areas to hide the Haqqani and the plethora of 'good' jihadi in the pay of the secret services and to make the local population live in a climate of pure terror.

And on April 8th, through a Facebook page called 'Justice for Pashtun', tens of thousands of people took to the streets in Peshawar to protest against the army, the government and the Punjabi domination.

Even in Lahore, precisely the land with a majority of Punjabis, eight thousand people gathered, arranged by Manzoor Ahmad Pashteen enthusiastically compared by many to Che Guevara.

Pashteen is a local Che, who instead bears a black hat with red embroidery.

Like Che, he is very young and studies medicine but, unlike the legendary Commander, he does not believe in armed struggle.

Pashteen is a convinced pacifist, and believes in democratic protest.

"We only ask to know where the thousands of missing persons have left without a trace. We want to know what happened to our people and, if among those taken from the services or by the police there are criminals, we want them to be tried in a court.

"We want a commission that investigates the extra-judicial killings committed by the State: from the secret services, from the army and from all the other organisms that have tortured and killed civilians of Pashtun ethnicity ".

For the moment, the State has responded in its own way, as it has been doing for years in Balochistan.

It has forbidden demonstrations, is arresting or using violence against anyone who supports the PTM and in recent months, nine activists have disappeared.

Even the shops that sold Pashteen-like hats were closed, and the sellers arrested.

All this has been happening for months now, in the face of deafening silence of the local press that, apart from a few stunted reports on a couple of English-language newspapers by definition 'untouchable', was ordered not to pass the articles of journalists or commentators that they took up the subject.

Because criticizing the army in Pakistan is a dangerous exercise, especially when, as the PTM does, the State is accused of playing a double game in the so-called fight against terrorism.

The same accusations, in fact, the West has been raising with Islamabad for years. Accusations to which, as usual, Islamabad first responded by accusing the Pashtuns of being supported by 'foreign agitators' and later releasing a handful of activists.

The PTM has not stopped, and will not stop, say its leaders, until justice is done.

Islamabad is playing with the fire. The government makes some concessions but continues to censor newspapers and televisions regarding the Pashtun protests, arrests the leaders of the PTM, prevents them from leaving the tribal areas and even puts them on the 'no-fly' list.

The number of people who took to the streets in the past days, however, tells a different story. A story from which Islamabad apparently has learned nothing at all.

A similar peaceful movement for human and civil rights, launched by the inhabitants of the then East Pakistan who were victims of the same kind of abuse, was forcibly suppressed and finally led to the birth of Bangladesh.

If the government and the Army force Pashtuns to abandon their peaceful protests and to join the armed resistance that operates, for example, in Balochistan, the consequences for Pakistan could be devastating and divide once again the country.