‘Did he wore janeu only for 3 states?’ Smriti Irani jibes at Rahul over Ram temple 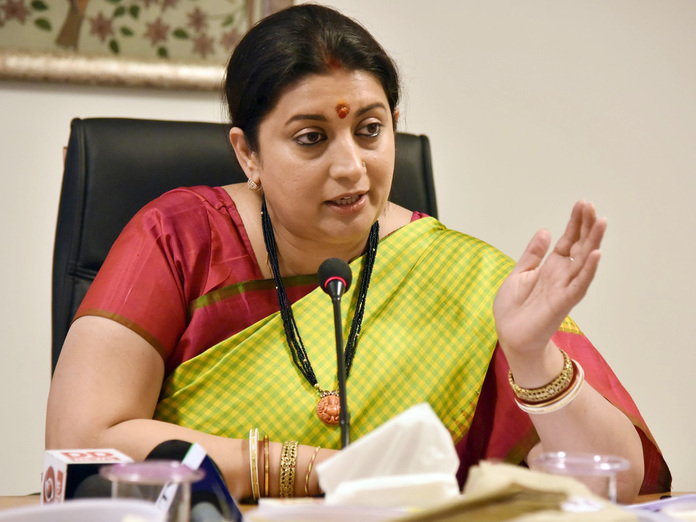 Lucknow: Union Minister Smriti Irani on Friday blamed the Congress for "creating hurdle" in the judicial process in the Ram temple case through its lawyers and said 'Ram Bhakts' should ask the party about it.

"Congress should not do politics through its lawyers on Ram temple issue, which is a matter of faith of people. Its leaders, as lawyers, are creating hurdle in the court. People and Ram bhakts should ask the party whether its leader wore 'janeu' only for polls of three states," she said.

Her reference was to senior Congress leader and lawyer Kapil Sibal, who sought deferment of hearing of the Ram Janmabhoomi-Babri Masjid title dispute till after the 2019 general elections.

Irani is on a day's visit to Congress president Rahul Gandhi's parliamentary constituency and was talking to media persons on way to Amethi, about 140 km from the state capital.

Attacking Rahul for delaying his visit to Amethi by a few hours, she said, "His coming late in 'maidan-e-jang' (battle field) of Amethi is an indication that the person who cannot visit his constituency on time cannot give timely solutions (to problems).”

Rahul had rescheduled his visit on Thursday night. He was expected to arrive in Lucknow at 10 am on Friday but later he changed the timing and will be landing in Fursatganj airstrip in the evening.

When asked whether Rahul was afraid of her, Irani said in a lighter vein, "Bina dare chartered flight se aa rahe hain" (he is coming on a chartered flight without any fear)." Rahul had defeated Irani in the 2014 Amethi Lok Sabha election and they are likely to lock horns once again in the upcoming general election.

The Congress chief will meet the people of his constituency, attend public and party reception, hold 'corner meetings' in Salon and visit Pareshdepur, Naseerabad, Paraiya Namaksar and Gauriganj areas on Friday. He will also take part in the oath-taking ceremony of the Gauriganj Zila Adhivakta Sangh and inaugurate the Adhivakta Bhawan, built from the MPLAD funds.

On Saturday, he will travel to Musafirkhana tehsil, Jagdishpur and Tiloyi, where he will meet the family members of late Shiv Pratap Singh, veteran Congress leader who died last week after a prolonged illness, before reaching Lucknow for his onward journey to Delhi.

Irani, on the other hand, will attend a programme organised by Raghav Sewa Sansthan during which blankets and financial assistance will be extended to needy people and a foundation stone for a school will also be laid.

Though the Union textiles minister was trounced by the Gandhi scion in 2014 election, she maintained her contact with the constituency, nurturing it and visiting it frequently.

Irani continued to cultivate Amethi during these years, dropping enough hints that she will once again contest against Rahul Gandhi in the polls.

Interestingly, this will be the first visit by the Congress president to his constituency after his party tasted victory in the recent assembly elections which, many believe, has rejuvenated the party cadre as well as its leaders.