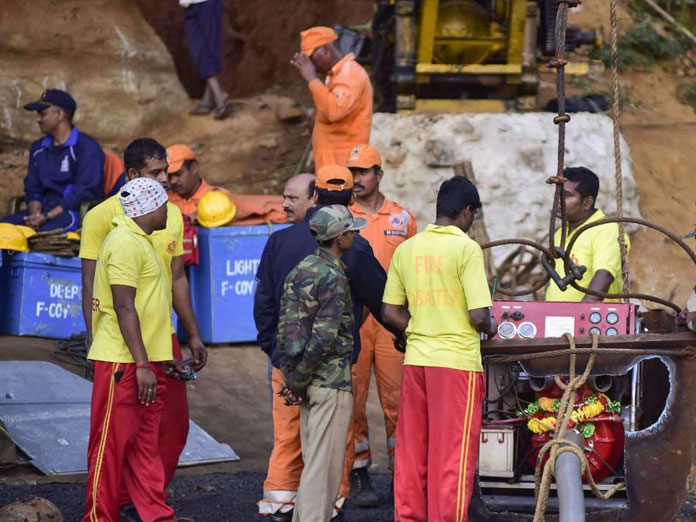 Rescue operations for the 15 miners trapped in a Meghalaya mine hit a roadblock on Sunday as the two highpowered pumps engaged in dewatering did not operate the whole day after developing technical glitches, and Navy divers could not venture down with no change in the water level, officials said

Rescue operations for the 15 miners trapped in a Meghalaya mine hit a roadblock on Sunday as the two high-powered pumps engaged in dewatering did not operate the whole day after developing technical glitches, and Navy divers could not venture down with no change in the water level, officials said.

The high-powered pumps of Kirloskar Brothers Ltd installed Saturday to pump out water from the main shaft, where the miners are trapped since December 13, developed glitches and could not function the whole day.

"Two pumps from Kirloskar Brothers and the submersible pump from Coal India encountered glitches and the dewatering process in the main shaft was affected," R Susngi, spokesperson for the operation, told PTI.

The two high-powered pumps are undergoing repair work, he said, adding that the CIL pump was replaced with a new one.

The CIL is expected to put into operation at least three more pumps on Monday, Susngi added.

However, no headway could be made in reducing the water levels in the main shaft and the nearby mines due to the malfunctioning of the pumps and fresh seepage, the official said.

Divers from the Indian Navy and the National Disaster Response Force (NDRF) could not venture down to gauge the water level inside the main shaft as it was beyond the safe diving limit of 100 feet, the spokesperson said.

The current water level in the main shaft is about 160 feet, while its total depth is around 370 feet.

Rescue work is suspended daily at around 5 pm as night falls. The Kirloskar Brothers pumps could be used for just one hour on Saturday, he said.

The owner of the illegal coal mine has been arrested.

"The BJP and the National People's Party (NPP) had both promised the people of the state to open up coal mining if they were elected to power. Actually, what they did was open up illegal coal mining within six months," Leader of Opposition Mukul Sangma told reporters here.