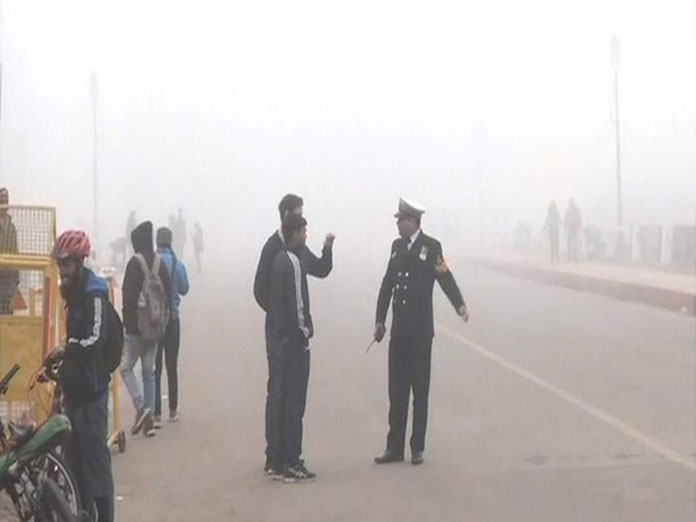 Dense fog descended over the national capital on a cold Monday morning bringing down visibility to 50 metres disrupting road, rail and air traffic as the minimum temperature was recorded at 8 degrees Celsius, one notch below normal

New Delhi:Dense fog descended over the national capital on a cold Monday morning bringing down visibility to 50 metres disrupting road, rail and air traffic as the minimum temperature was recorded at 8 degrees Celsius, one notch below normal.

"There was dense to very dense fog in parts of Delhi. The sky will remain partially cloudy during the day with haze and smog thereafter," an India Meteorological Department (IMD) official said.

The intense fog made the Delhi Traffic Police issue an advisory which asked drivers to use low beam head lights, avoiding overtaking and checking weather updates before leaving house.

Low visibility contributed to the delaying of 27 Delhi-bound trains.

"There was not a single cancellation or diversion of flight at the Delhi Airport on Monday. There could be of up to 15-20 minutes delay in departures as per the Air Traffic Control (ATC).

"The runway visibility had improved to 150 metres after sometime," a DIAL spokesperson told IANS.

The visibility improved to 2,000 metres by 10.30 a.m. at Safdarjung, the IMD said, however, it was poor at Palam adjacent to the airport, where it was 300 metres.

One of the reasons cited for the sudden dense fog was calm winds and rains in the preceding days.

"Rains and calm winds contributed to the forming of the fog. It was expected to happen on Sunday too, but winds with speed around 10-15 kmph scattered them," Mahesh Palawat of Skymet said.

The fog will continue for the next couple of days due to a western disturbance approaching on Tuesday, which will lead to a change in the direction of the wind.

There was no rainfall in the past 24 hours. The IMD forecast light rains accompanied by thunderstorm or hail from Tuesday till Thursday that will reduce the likelihood of fog, he added.