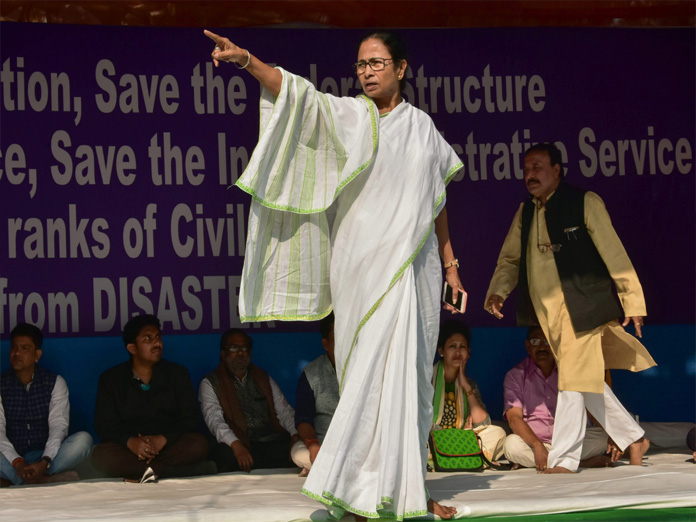 Escalating the battle between the Centre and the state, the Ministry of Home Affairs has written to chief secretary of West Bengal seeking disciplinary action against Kolkata Police Commissioner Rajeev Kumar, while the Supreme Court directed the CBI not to resort to any coercive action including the arrest of the officer

​New Delhi: Escalating the battle between the Centre and the state, the Ministry of Home Affairs has written to chief secretary of West Bengal seeking disciplinary action against Kolkata Police Commissioner Rajeev Kumar, while the Supreme Court directed the CBI not to resort to any coercive action including the arrest of the officer.

The apex court on Tuesday asked the Kolkata Police Commissioner to appear before the CBI and faithfully co-operate in the probe into the Saradha chit fund scam. A bench of Chief Justice Ranjan Gogoi, Justice L Nageswara Rao and Justice Sanjiv Khanna said the investigation would take place at a neutral place -- in Shillong.

On the other hand, in a letter dated February 5, the police division of the MHA said that Rajeev Kumar is prima facie guilty of violating all India service rules as he sat on a political dharna.

The MHA communication cited the extant provisions of the rules 3(1),5(1) and 7 of the AIS (conduct) Rules, 1968 which were reportedly flouted by Rajeev Kumar. Under rules 3, 5 and 7, Rajeev Kumar has been accused of criticising the government, embarrassing the government and Centre-State relations.

The apex court also sought responses from the West Bengal Chief Secretary, the Director General of Police and Rajeev Kumar on a contempt petition moved on Monday by the CBI along with the one asking for direction to Rajeev Kumar to surrender for questioning.

During the hearing, Attorney General K K Venugopal described the situation as "a total breakdown of constitutional machinery" and Solicitor General Tushar Mehta highlighted that CBI personnel were detained at a police station.

Appearing for the Kolkata Police Commissioner, senior counsel Abhishek Manu Singhvi told the court: "They have asked for surrender when no offence is made out. "Rajeev Kumar is vilified. He has written to the CBI to meet at a neutral place where the entire SIT will be there to be questioned," Singhvi told the court.

Justice Gogoi said: "The problem with you is you assume too many things. What is your problem, you can cooperate.”The next hearing will be on February 20. Former MHA officials who have dealt with Centre-State relations said the MHA action appears to be more for optics.

"State government is not rule bound to take action as asked for by the MHA. Home affairs is the cadre controlling authority but since he is working with the state government now, they can make their own assessment,” said MHA official who did not wish to be named.

Officers close to Rajeev Kumar disputed the charge that he was sitting on dharna. They argued that as a city police commissioner he was present during the investiture ceremony and did not criticise the government even when he was on stage.