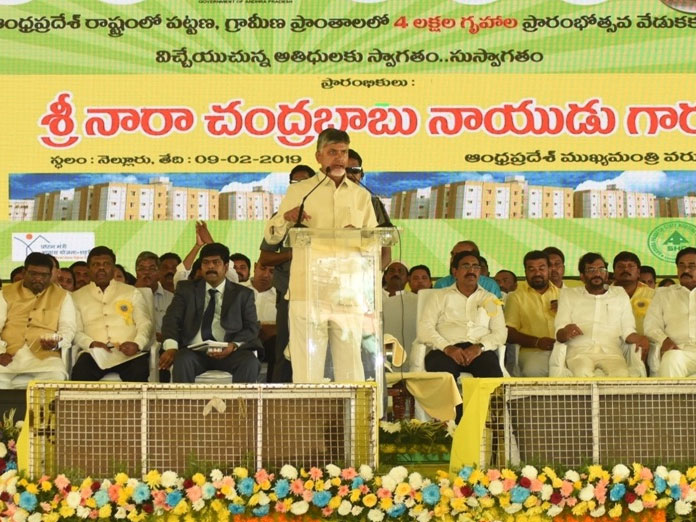 Andhra Pradesh Chief Minister N Chandrababu Naidu who gave offerings to the voters such as pension hike, Pasupu Kumkuma to the members of selfhelp groups finally wooed them to consider voting the ruling party in the coming elections saying he had done what common people require for their happy living

Nellore: Andhra Pradesh Chief Minister N Chandrababu Naidu who gave offerings to the voters such as pension hike, Pasupu Kumkuma to the members of self-help groups finally wooed them to consider voting the ruling party in the coming elections saying he had done what common people require for their happy living.

The Chief Minister launched the third phase housewarming celebration of 4 lakh houses built across the state at Nedurumalli Janardhan Reddy colony in Nellore on Saturday. He addressed the public meeting arranged at the housing complex and said that the ruling party had bagged only 3 seats in last elections but he hadn’t minded it and developed the district with many activities.

“I did the best for the district though you had not voted for Telugu Desam in the previous elections. Now, I seek support from you for winning all 10 seats in the district and the spectacular development is the testimony for our commitment and dedication towards serving the poor. If you continue the traditional voting pattern to a party which is non-cooperative and negligent towards welfare of the people you will be losing significant progress in the future,” warned the Chief Minister.

The housewarming ceremony had finally turned out to be an election campaign in the district with immediate announcement of candidates for three constituencies. The Chief Minister keenly focused on women and local development for wooing support of the voters explaining the development activities in detail. He junked the role of opposition in the state saying they are like salaried employees who failed to focus on welfare of the people.

“YSR Congress legislators were irregular in attending the assembly sessions and were very punctual for getting honorarium on every first of the month. You decide whom to vote and whom to discard? This is crucial time for teaching lesson to such people who deceive you with false assurances. They provide you misinformation on actual development. We give priority for local and strong candidates and don’t judge their qualifications where the parameter is impeccable progress across the state,” said Chandrababu Naidu criticizing performance of the opposition.

He also said that they had done best for people for last five years and are having clear plans for next five years. He said that they had offered Pasupu Kumkuma to women across the state and are ready to offer again and again as he is having around 95 lakh women who treat him as an elder son.

“They are having a paper and TV and have been spreading false news on a daily basis. We don’t care their misinformation but seek your blessings always as my government is ready to work for you. Thing is you have prepare your mindset to support the progress and reject falsehood throwing them into the Bay of Bengal,” said the Chief Minister.