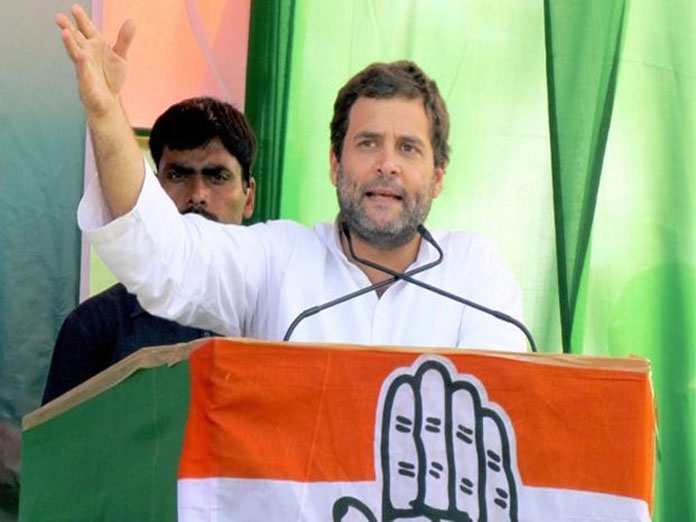 Congress President Rahul Gandhi on Thursday launches his 2019 election campaign from the same tribal Lal Dungri village in Gujarats Dharampur where his grandmother Indira Gandhi in 1980, his father Rajiv Gandhi in 1984 and his mother Sonia Gandhi in 2004 started and romped home to power

Lal Dungri (South Gujarat): Congress President Rahul Gandhi on Thursday launches his 2019 election campaign from the same tribal Lal Dungri village in Gujarat's Dharampur where his grandmother Indira Gandhi in 1980, his father Rajiv Gandhi in 1984 and his mother Sonia Gandhi in 2004 started and romped home to power.

The party believes Lal Dungri (translated as Red Onion) brings good omen for it to rule the country. Many remote villages in this South Gujarat region recognize only the Congress' hand symbol and remember only former Prime Minister Indira Gandhi.

Not losing out on the fact that the Congress attaches historic importance to this region, the Bharatiya Janata Party moved in Chief Minister Devendra Fadnavis from neighbouring Maharashtra to Dharampur on Wednesday, a day ahead of Rahul Gandhi's Jan Akrosh Rally, to galvanise over 4,000 party workers at a 'cluster meeting' of the party's rank and file in presence of state chief Jitu Vaghani.

The meeting, held at Rajchandra Ashram hall in Dharampur, was to address party workers of three Lok Sabha constituencies in South Gujarat dominated by Adivasis.

Fadnavis told party workers that Prime Minister Narendra Modi and his government had got a clean chit on the Rafale fighter jet deal from the Comptroller and Auditor General (CAG) while the Congress leaders' hands were sullied in AugustaWestland chopper deal.

Rahul Gandhi, meanwhile, was expected to make a strong statement against land acquisition for the bullet train in this region where angry farmers who are losing their fertile fields are locked in a battle with the government, the matter now awaiting a judgment in the Gujarat High Court.

Sources say there is also a move to hold a meeting of the party's highest decision making body, the Congress Working Committee (CWC), in South Gujarat to demonstrate the importance the party gives to the state.

The decision to choose Gujarat over the Congress ruled states is a pointer in this direction.

This is besides Rahul Gandhi choosing to walk in the footsteps of Indira Gandhi, Rajiv Gandhi and Sonia Gandhi in Lal Dungri.

Though Fadnavis' Dharampur visit was announced by the party only on Tuesday, BJP Gujarat General Secretary Bharatsinh Parmar insisted their meeting had been fixed earlier than the Congress rally.

The Congress party had announced to hold its 'Jan Akrosh' rally from here on February 6.

The Congress has pulled out all stops for the Lal Dungri rally and the state unit has galvanised its 75 legislators to ensure a big show.

Gujarat Congress chief Amit Chavda and Leader of Opposition Paresh Dhanani have been camping in the district headquarters of Valsad to oversee the preparations.