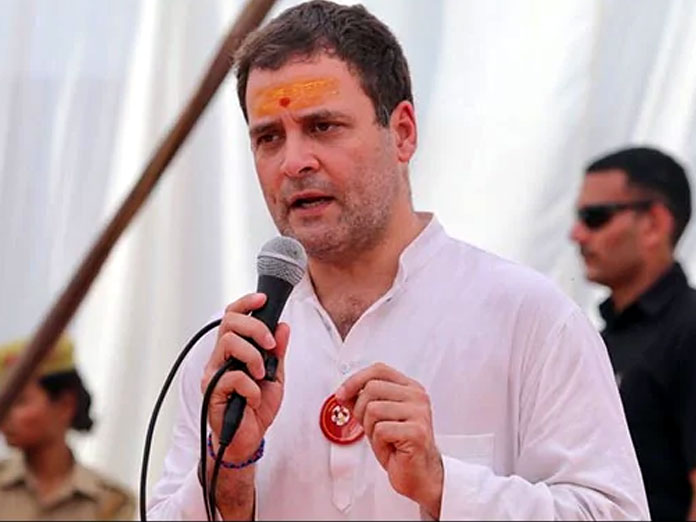 As the border tensions melted away, Congress President Rahul Gandhi on Friday resumed his attack on Prime Minister Narendra Modi, catapulting defence deals, farmers issues and unemployment back to the centre stage

Kicking off the party's 2019 Lok Sabha campaign at a massive public rally here this evening, Gandhi said that ever since Modi and the Bharatiya Janata Party (BJP) took over in 2014, the Prime Minister had been making promises but did nothing to implement them.

"After the CRPF troopers were martyred and a warlike situation came up, I instructed all Congressmen and appealed to the countrymen that at this critical hour nobody will criticize the government and India must stand united," he said.

However, while Modi claimed that "India is united", he took every opportunity to attack the Congress and the opposition, even at the inauguration of the National War Museum.

"Not even for five minutes has he left his PR… We had decided that only after the national crises gets over shall we resume politics," Gandhi thundered.

Discussing high profile defence deals, Gandhi sought to know "what was the mistake committed by Hindustan Aeronautics Ltd (HAL) which has been making Mirages, Sukhois, Gnats, Jaguar and other aircraft".

Targetting the government on farmers' issues and the unemployment problems, he said Modi had claimed that every 24 hours, 450 youth were being jobs but China created 50,000 jobs every day - "and we have to overtake China, and only the Congress can do this."

Touching the farmers' problems, he said thrice Modi attempted to dilute the Land Acquisition Bill but on all occasions the Congress, despite its small strength in Parliament, successfully stalled it.

He pointed out that the government had given Rs 17 per family to the farmers but had written off Rs 3.50 lakhcrore loans of 15-25 of the big industrialists.

"Modi says he will give employment, but those who could create jobs were destroyed by demonetization… Only the poor people stood in bank queues, while Nirav Modi, Mehul Choksi and others sat in their plush homes and converted their money."

He said the Congress and the Nationalist Congress Party were fighting the elections in alliance. "The people of Maharashtra will unitedly teach a lesson to BJP an Modi."