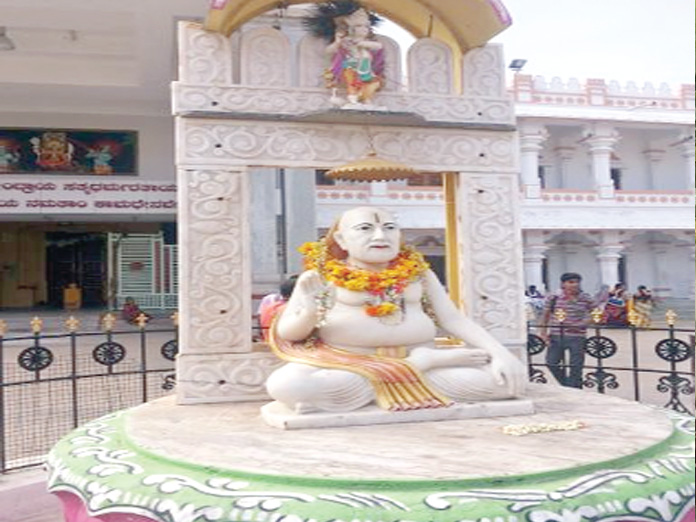 Although l travel extensively across India, only recently, I happened to visit Mantralayam where I was shocked to witness Telugu language being...

Although l travel extensively across India, only recently, I happened to visit Mantralayam where I was shocked to witness Telugu language being insulted and belittled much to the heartburn of people like me who feel privileged to have the sweet language as mother tongue. It is deplorable that some hotels and shops have their names written in 3 other languages but not in mother tongue Telugu.

In some cases, even though names are written in Telugu , the size of letters are smaller than that of other languages. More regrettable is that the main entrance gate of Raghavendra Swamy temple has spiritual chants illuminated in electronic letters written in the language of the adjacent state but not in Telugu.

Needless to say that any Indian who stands for national integrity loves and respects all Indian languages. If any Indian loves only his/her mother tongue, and hates other Indian languages, it amounts to linguistic chauvinism which should be avoided and condemned in letter and spirit. At the same time, there is nothing wrong in promoting our own mother tongue in our own state to the best of our ability. In Maharashtra state including Mumbai, even numbers are written on all city buses and at other places in Marathi language only. In Tamil Nadu state, names of even big shops and prestigious show rooms appear in only one language that is Tamil.

It may be true that the temple town Mantralayam is on the border of AP and the owners of several shops and hotels are not from the Telugu speaking State. But, when they do business in a state other than their home state, It is their minimum responsibility to display name boards in the mother tongue of that particular state also. I am sure nobody has courage to establish a business house in Tamil Nadu without a Tamil version of name board.

Telugu people boast of themselves to be the successors of the legacy of iconic NTR who elevated the status of Telugu language and the pride and identity of Telugu people to greater heights nationally and internationally. How can we become the legatees of NTR by being scornful to our own mother tongue? The political class ruling the state of AP needs to take stock of the plight of Telugu language in Mantralayam and other places, if any, and plunge in to action to prevent Telugu language from being buried permanently in its own land. After all, it is unpardonable not only to be chauvinistic of the mother tongue but also to be disrespectful of the mother tongue.