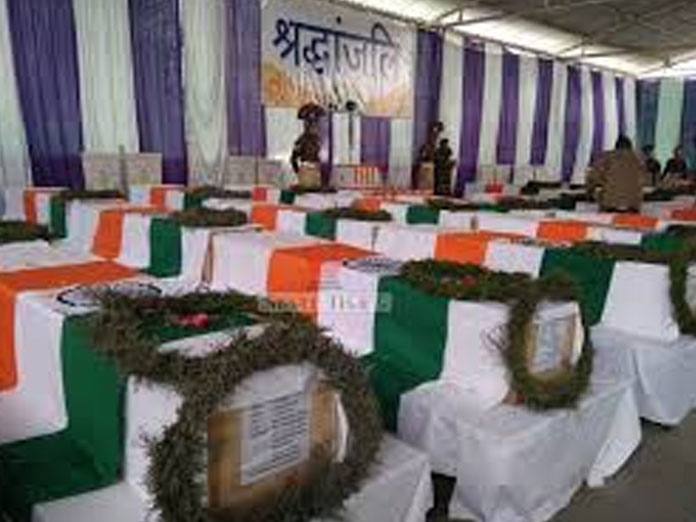 While there can be no second opinion as to the view that there shall be no compromise on the States and Centres responsibility to ensure the continued well being of the citizens outside the JK state,it is also but fair and equitable to ensure, with equal earnestness, safety and security for those citizens, and police and armed forces as well, who of late, are becoming the target of attack

While there can be no second opinion as to the view that there shall be no compromise on the State's and Centre's responsibility to ensure the continued well- being of the citizens outside the J&K state,it is also but fair and equitable to ensure, with equal earnestness, safety and security for those citizens, and police and armed forces as well, who of late, are becoming the target of attack by those forces who allege alliance to the separatist elements.

It would also be no less disturbing to find that the minorities are persecuted and harassed by the majoritarian mobs in the J&K state.In the event,all Kashmiris, irrespective of their locales, shall enjoy all protections and rights available to them as Indian citizens.

The Pakistan Prime Minister Imran Khan’s statement, denies the involvement of Pakistan in Pulwama attack and he needs concrete evidence to act upon. When India has provided adequate evidences as a proof of involvement of Pakistan in the Mumbai Taj attack and also in the Pathankot Air base attack, still Pakistan is yet to react. It is not understood how much proof Pakistan requires, when it’s globally known that, the Jaish –e-Mohammed is behind the backdrop of deadly Fidayeen attack at Pulwama and its chief is hiding in the territory of Pakistan.

It’s high time for Pakistan to step back from supporting terror activities, as the whole world is aware of its association in spreading violence. Enough of dialogue and peace talks held between India and Pakistan in sorting out the Kashmir issues, whereas Pakistan is yet to comply with the peace terms. In retaliating towards the Pulwama incident, India’s stand to withdraw the Most Favoured Nation status, security covers to the separatist group in Kashmir, hiking customs duty and putting end to the water flow towards Pakistan is appropriate and justifiable.

Oppn should hold their horses

The dirty, despicable mindset of certain bunch of politicians is exposed after the tragic event of Pulwama where India lost the lives of brave jawans. At a time the entire India in unison mourning the deaths, even when the memory of ghastly incident is fresh in the narrow minded congress politicians like Navjot sidhu,Shashi Tharoor, Randip Singh Surjewala and their immature leader Rahul Gandhi passing negative comments against Prime Minister of India is shameful and the people are angry at their insensitive behaviour.

Maverick and perpetual street fighter Mamata Banerjee’s foolish comments and the imbalanced comments made and venom vomited by Chandrababu Naidu are certain to attract the ire of the people and their insensitive comments will cost them dearly in the fast coming elections. Let us be sensible and responsible, after all this is our country when enemy caused such a colossal destruction and killed our jawans, instead of showing solidarity, they are making silly and laughable comments. The people of India never forgive such negative elements.

When we were saying that Kashmir is an integral part of India, then why the Kashmiri people were neglected and suffering for more than 70 years? Since India's Independence, the previous governments have done nothing for the people of Kashmir and even failed to bring them in the national mainstream.

Former finance minister P. Chidambaram has rightly said that we want Kashmir to be a part of India, but do not want Kashmiris to be Indians. Unfortunately, these were the policies of our governments which I failed to understand this logic until now.

Pak will now feel the pinch

India,deeply pained by the gruesome terror attack at Pulwama by Pakistan's terror outfit, deciding to stop its share of water to Pakistan from rivers under the Indus Water Treaty is a step in the right direction. As Pakistan ordinarily acts contrary to international laws and convention on most issues, it would feel the pain only if it is affected. By stopping water, India has sent a strong message to Pakistan that it cannot take India's generosity for granted.

In this connection, Water Resources Minister Nitin Gadkari has correctly clarified that there is no violation of treaty because water given so far to Pakistan from the rivers flowing in India is rightly due to people of our country and only due to generosity to maintain good relations with Pakistan, India has been giving water.

Since Pakistan by its actions so far only tried to bleed India, the decision to stop water should serve a lesson to Pakistan to forthwith stop its misadventure, otherwise it will have to pay a heavy price. Though, actual implementation of the decision to stop water flow into Pakistan can take effect only after dams as high as 100 metres are constructed which will take few years, Pakistan should act constructively and positively in the intermittent years to build cordial relations with India to improve its economy instead of remaining adamant and exporting terror.