No child born after 2000 has enjoyed childhood 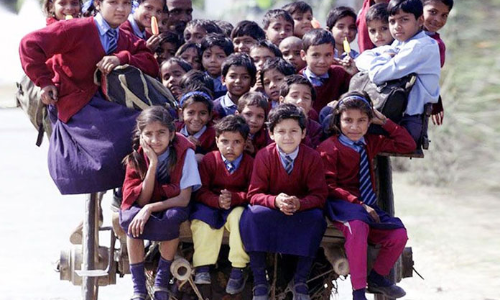 Some time back on the eve of the birthday of Prime Minister, he addressed the school children in Narur village in UP part of his parliamentary...

Some time back on the eve of the birthday of Prime Minister, he addressed the school children in Narur village in U.P (part of his parliamentary constituency) and rightly exhorted kids to go out and play. That’s really a worthy advice but where exactly shall the kids play, since nearly 50 per cent of government schools and 80 per cent private schools in India have no play grounds.

According to the CBSE guide lines every school need to have outdoor facilities for the 200.meter track with adequate facilities to play games like volley ball, cricket and practice other athletics. The Right To Education Act 2009 also made it mandatory for schools to have their own play ground in the school premises itself.

The powerful, rich education lobby in connivance with central corrupt officials watered down the directive through an amendment in 2012 stating it is not mandatory for schools to provide playground facilities within the school premises as long as they could make alternative arrangements in adjoining municipal parks and other open areas.

How ridiculous the amendment sounds? It is meant to provide leverage given to private schools to establish schools without play grounds just for record sake they show some vacant land as playground to get permission. We are all aware that most of the expensive schools run in apartments or in the in sufficiently ventilated concrete constructions built to suit their purpose and they look more like poultry sheds than temples of learning and all private schools without exception are run devoid of play grounds.

Children studying in the private schools can be compared to the birds in poultry cages as they stay there from 8.30.am to 8.30.pm. No kid born after 2000, have had the pleasure of enjoying childhood, they study in prison like schools and we parents are all responsible for their ordeal, most of the disorders like obesity,blood pressure, gastric, headaches are the result of sedentary life style of our children.

The central sports minister Rajyavardhan Rathore himself is a Olympic medal winner he knows the importance of sports and games, he only mouths platitudes , strict implementation of school grounds is nowhere in sight. Compulsory playing of games and sports must be made a part of education curricula not only for the health of the today’s young children but for our tomorrow’s agile strong citizens. The lazy type of imparting education makes our present children mentally sharp and physically weak that is why our Indian dream to produce Olympic medal winners remains a pipe dream.

Nikhil donates personal protection kits to combat Coronavirus
We use cookies for analytics, advertising and to improve our site. You agree to our use of cookies by continuing to use our site. To know more, see our Cookie Policy and Cookie Settings.Ok