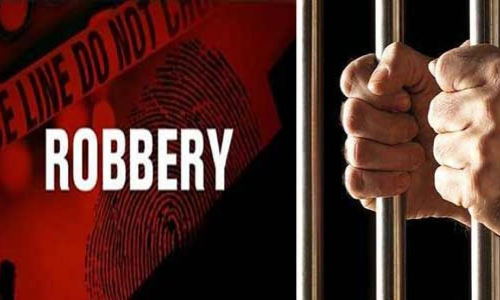 A 53-year-old Indian in Singapore has been jailed for over three years for robbing a compatriot jeweller of cash and valuables to the tune of $31,910, media reports said.

A 53-year-old Indian in Singapore has been jailed for over three years for robbing a compatriot jeweller of cash and valuables to the tune of $31,910, media reports said.

Yelchur Sreenivas, 51, was robbed by Srinath Bari Ramdeo Bari and his two accomplices near Towner Road as he was returning home on May 25 last year.

Srinath along with his two accomplices repeatedly hit Sreenivas with a wooden pole and robbed him of cash and valuables worth about 43,000 Singapore dollars (USD 31,910), The Straits Times reported.

Srinath also pleaded guilty to two counts of failing to report for a urine test (for drug checks) and was given a six month jail term on each charge, the report said.

A fourth charge of failing to report for his test was considered during his sentencing, it said In lieu of the mandatory 12 strokes of the cane, Srinath, who is above 50 and cannot be caned, was given an additional jail term of 20 weeks, the report said.

District Judge Jasvender Kaur ordered the sentence for the robbery and one of the urine tests to run consecutively, making a total of four years and 20 weeks in jail, it said.

She backdated his sentence to September 23 last year.

The robbery's mastermind Venkatachalapathy, 48, was sentenced to four years and three months' jail and 12 strokes of the cane on November 2.

The third accomplice, Hassan, 36, who goes by one name, has claimed trial.

Deputy Public Prosecutor Zulhafni Zulkeflee said Venkatachalapathy knew the victim was involved in the jewellery business and roped in Srinath and Hassan for the robbery.

Yelchur was carrying a haversack containing cash and jewellery samples while walking along Towner road at midnight when he felt somebody pulling it from behind.

He turned around and saw Venkatachalapathy, who shoved him to the ground.

Venkatachalapathy tried to snatch the haversack but failed. He then ran away.

Yelchur was getting up when Srinath came from behind and struck his shoulder a few times with a pole. Just then, Venkatachalapathy came back, grabbed the haversack, and fled with Srinath.

The bag had cash and valuables totalling 42,775 dollars.

When Venkatachalapathy was arrested the next day, the police recovered cash and valuables amounting to 36,175 dollars. Srinath, arrested in August last year, could have been jailed for up to 14 years for robbery.

For failing to report for a urine test, the maximum penalty is a 10,000 dollars fine and four years' jail.