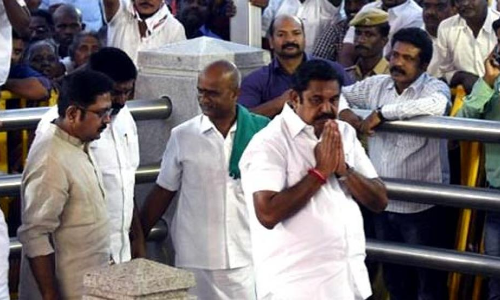 Sasikala loyalist E K Palaniswami today won an easy trust vote 122-11, aided by the eviction of main opposition DMK and walkout by its allies, amid stormy scenes during which mikes were uprooted, chairs toppled and sheets of papers torn and hurled around.

Chennai: Sasikala loyalist E K Palaniswami today won an easy trust vote 122-11, aided by the eviction of main opposition DMK and walkout by its allies, amid stormy scenes during which mikes were uprooted, chairs toppled and sheets of papers torn and hurled around. The legislative assembly was reduced to a battleground, with Speaker P Dhanapal pushed and shoved around by agitated DMK MLAs whose leader M K Stalin warned they would commit "suicide" if attempts were made to marshal them out by the order of the chair before the crucial trust vote was conducted in their absence.

Palaniswami won a resounding majority with 122 AIADMK MLAs supporting him during the vote of confidence after those of the DMK were evicted and its allies staged a noisy walkout. Together they accounted for 98 MLAs in the 234-member Tamil Nadu assembly. For all his spirited challenge, Palaniswami's rival O Panneerselvam could muster support of only 11 MLAs. The division vote was taken up after two adjournments following tempestuous scenes during which the opposition MLAs insisted on a secret vote, a demand rejected outright by Speaker Dhanapal. Soon Dhanapal was surrounded by a swarm of agitated DMK members, one of whom was seen trying to snatch the microphone from him.

Some angry opposition MLAs were seen hoisting and menacingly waving the chairs of official assembly reporters, while others tore sheets of paper and flung those around, including some towards the Speaker's podium. A few opposition MLAs were seen pushing the Speaker, prompting the watch and ward staff to immediately throw a security cordon around him and escort him to safety. The shirts of Speaker Dhanapal and Leader of the Opposition Stalin were torn in the melee. After adjournments, when the House reassembled at 3 PM, Speaker Dhanapal, allowed Panneerselvam, who was among the votaries of a secret vote, Congress Legislature Party leader K R Ramasamy and IUML member Abubacker to make brief remarks.

The Speaker then ordered a block-wise division during which the MLAs were to stand in order to support or oppose the resolution moved by Palaniswami seeking confidence of the House. The Palaniswami government sailed through the trust vote having garnered the support of 122 MLAs, with the DMK seats empty. Panneerselvam's 11 MLAs voted against the resolution. DMK's allies and Congress walked out and did not participate in the voting.