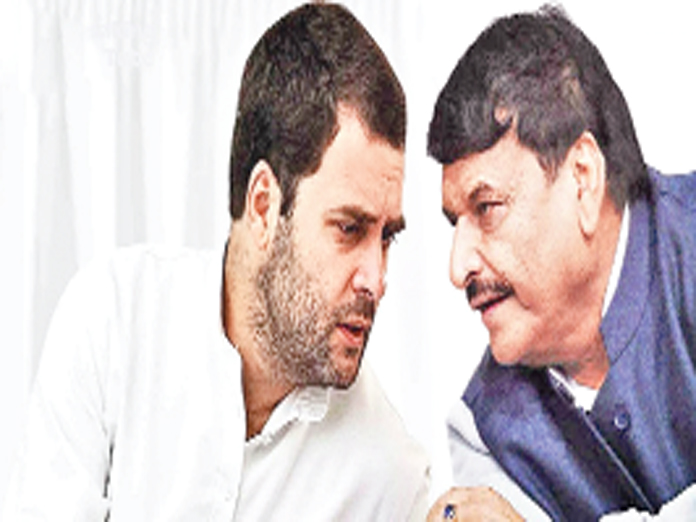 Lucknow: Shivpal Singh Yadav on Sunday said that his Pragatisheel Samajwadi Party-Lohia is ready to form an alliance with the Congress in Uttar Pradesh for the coming Lok Sabha elections.

However, the PSPL chief said that no talks have so far been held in connection with forging an alliance with the Congress. "There have been no talks with the Congress party as yet. The Congress is also a secular party and if it approaches us to defeat the BJP, we will lend our support," he said.

Yadav's statement comes a day after the Samajwadi Party and the Bahujan Samaj Party went for forging an alliance among themselves keeping the Congress party out of the new alignment. The SP and the Congress had fought the last assembly polls in Uttar Pradesh as allies.

Yadav, who parted ways with Akhilesh Yadav-led, also expressed interest to forge an alliance among all secular parties including the Congress to oust the BJP from power in the upcoming Lok Sabha elections.

"No alliance can defeat the BJP without support from the PSPL, the Bahujan Mukti Party and our other allies. We are ready to form an alliance with other secular parties to defeat the BJP in the Lok Sabha elections and oust it from power at the Centre," added Yadav.

The SP and the BSP on Saturday announced that they would contest on 38 seats each, adding that they would not field candidates against Congress president Rahul Gandhi in Amethi and UPA chairperson Sonia Gandhi in Rae Bareli. They have also kept two seats for the smaller parties.

The Congress party too on Sunday announced that they would contest on all 80 Lok Sabha seats at stake in Uttar Pradesh with 'full might,' but did not rule out the possibility of joining hands with the secular forces in the state to defeat the BJP in the state.

"Under the leadership of Rahul Gandhi, the Congress will fight the coming Lok Sabha elections with full might and defeat the BJP. The whole world knows that the fight is between the Congress and the BJP. We will welcome those who join us in this fight.

It is not an individual's fight, but of principles and keep India united," Congress leader and in-charge for the party's UP affairs Ghulam Nabi Azad told a media persons in Lucknow on Sunday.