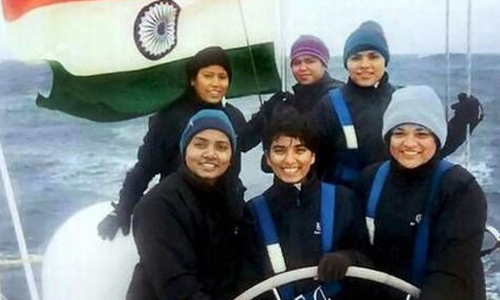 The allwomen crew of Indian Navys sailing vessel Tarini did not just charter a new course into history, but also conquered their own fears and learned to rise above petty issues to steer towards a common goal as a welloiled team

New Delhi: The all-women crew of Indian Navy’s sailing vessel Tarini did not just charter a new course into history, but also conquered their own fears and learned to rise above petty issues to steer towards a common goal as a well-oiled team.

Lieutenant Commander Vartika Joshi, who led the first all-women Indian crew to successfully circumnavigate the globe, shared that the team, onboard the 55-foot sailing vessel, had its moments of joy and frustration, but “we learned to remain focussed on our goal”.

“Every person has a set of skills and people have their own positive and negative qualities. And, for me the biggest challenge was to filter those positive things and utilise it for the advantage of the entire team.

And, the biggest goal ahead was to have the mission steered successfully, and that goal held maximum priority,” Joshi told PTI in an interview.

The skipper of the indigenously-built vessel, who hails from Rishikesh, said, all six women were away from the homeland, and out there in the sea, battling treacherous seas and loneliness, so, “there were moments when emotions ran high”.

“So, for me the biggest challenge and the biggest learning, was to make teammates make peace with each other, with the entire team and not compromise the goal set for us,” Joshi said.

The journey of ‘Tarini’ has been showcased in a documentary jointly made by National Geographic and the Indian Navy that premiered at an event at the Lady Shri Ram College for Women here and received a standing ovation.

The six women officers had trained under Captain Dilip Donde, the first Indian to circumnavigate the globe solo in 2009-2010. The film, ‘Tarini’ on the historic expedition will air on the National Geographic channel on March 8 to mark Women’s Day.

In the documentary, besides the six sailors, vice-admiral (retired) Manohar Prahlad Awati, and family members of the crew have also been interviewed. Awati, who died last November, had described the six women officers the “serendipitous six”.

During the course of the journey, the crew had also cut a cake when they crossed the equator and also learned to become self-sufficient and appreciated the value of water.

“We would stock up to 400 litre for every 40 days. The expedition also taught us to conserve water, something we take for granted on land or waste so much,” said Lt Boddapati.

She also said, the voyage taught all of them to be “fearless in life”, adding, “the expedition was tough but it helped me conquer my fears”.

Lt Cdr Joshi also shared about the time they faced one of the worst storms in the choppy waters. “We were on a sail boat powered by wind. So, at times, we would get stuck mid-sea with no movement when there was no wind.

As per the storms we faced, the worst I would say was the one in South Pacific, where winds with speed up to 70 knots or 120 kmph, buffeted our vessel,” she recalled.

The sailors also concurred that the voyage made them “more humble and be more acceptive of others”. “I also learned to be neutral in various situations. In long-distance voyages, one might get frustrated over the silliest of things.

But, after completing this expedition, we learned to rise above silly things and keep the larger picture in mind, the eventual goal,” Joshi said.

As the crew smashed glass ceilings and broke gender barriers, it had a message for those who doubt a woman’s capabilities.

“The boat doesn't know who is onboard, or who is steering. The only thing that matters is your competency, and we got selected because of our competencies,” the Tarini skipper said.

Lt Cdr Pratibha Jamwal, also had a message to girls and women, “You are more than your gender”. A spokesperson of the National Geographic said, a lot of footage was sourced from the crew of Tarini, from their onboard fixed cameras, and films shot by them on other devices.

“Drone shots were added post-production showcasing the gleaming Tarini floating in the middle of the ocean, to add to the narrative we wanted to showcase,” he said.

Joshi used the metaphor of the mast, one of the sailors had to climb to fix it during the expedition, to drive home a lesson, “One can be scared of being at the top or enjoy the view. Choice is yours.”