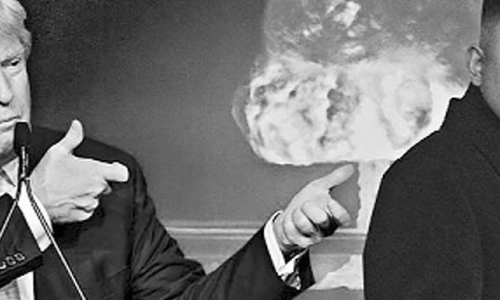 ##The head-spinning ups and downs of the “on-off-and-now-maybe” summit between Donald Trump and North Korea’s Kim Jong Un is diverting attention from the real choice facing the US President: if he remains inflexibly committed to eliminating Pyongyang’s nuclear weapons and missile program by the end of his first term, he will fail.

The head-spinning ups and downs of the “on-off-and-now-maybe” summit between Donald Trump and North Korea’s Kim Jong Un is diverting attention from the real choice facing the US President: if he remains inflexibly committed to eliminating Pyongyang’s nuclear weapons and missile program by the end of his first term, he will fail.

Contrary to the sky-high expectations being set, rollback of North Korea’s nuclear and missile programs will not happen anytime soon because – after investing so much blood, sweat, and treasure to develop operational nuclear weapons over the past 25 years – the North will not give them up quickly or easily.

Still, a Singapore summit can succeed – if Trump sees these talks as the start of a process, not the end. Perhaps, recognition of this reality is why negotiations now appear to be heading for a “phased approach” to denuclearisation. Trump and Kim may be considering a “much more for much more” deal. This means in exchange for a big down payment from the United States in the form of sanctions relief, political legitimacy and security, the more the North will give – and quicker. This makes me hopeful.

However, with all things Kim and Trump, nothing is certain – especially as there is likely an intense struggle within the White House for the President’s heart and mind. Newly appointed National Security Adviser John Bolton fervently believes negotiations with North Korea are useless; in contrast, recently-installed Secretary of State Mike Pompeo is working hard by traveling to Pyongyang and meeting with North Korean officials in New York to make something happen.

If Bolton’s view prevails, then there is only one way for Washington to ensure early and complete denuclearisation – force Pyongyang into compliance. This requires unrelenting diplomatic, financial and military pressure and threats that either grinds the North Korean leadership into submission, or topples Kim Jong Un and his cabal from power with the hope that a “friendly” leadership emerges.
Both are bad bets.

Expecting the North to crumble and submit to U.S. demands is, for anyone who knows North Korea and its history, pure folly. For decades the North has demonstrated the ability to endure incredible hardship (over a million people died of starvation in the 1990s). It has confounded China, Russia, Japan and the United States because the regime’s very legitimacy ultimately rests on its ability to skillfully defy the demands of larger powers, often playing one off the other. For Kim, capitulation would be tantamount to regime suicide.

Regime change – which could happen slowly via sanctions and political isolation or quickly through covert or overt military action – is also problematic. During George W Bush’s first term, Washington pursued the slow approach with Kim’s father, Kim Jong Il, and the fast approach with Saddam Hussein. History proved that neither was particularly successful.

True denuclearisation means creating a very different political and security environment so that the regime no longer views its long-standing, adversarial policies or weapons as necessary. No piece of paper, no promise, no assurance from the United States will suffice. This is a daunting task – and will take years. Think about how the Vietnam-US relationship has changed since the end of that war.

These are tough choices. If and when Trump and Kim do meet (and I think they will), there will be an impasse. Trump wants denuclearisation sooner; Kim, later. How long will an impatient American leader wait and how much will he give in return? Let’s hope the president listens more to Pompeo, not Bolton.

(Philip W Yun is executive director of Ploughshares Fund, a San Francisco security and peace foundation. He previously served as a senior adviser to two US coordinators for North Korea at the Department of State)