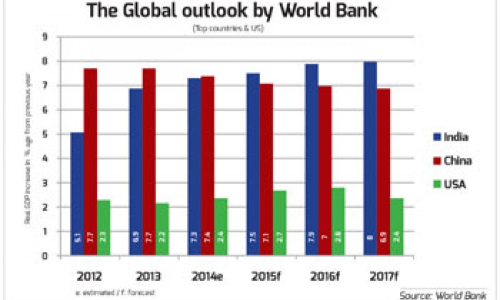 India has the potential to be the world’s fastest growing economy over the next decade far outpacing China. This conclusion by the Harvard Centre for...

India has the potential to be the world’s fastest growing economy over the next decade far outpacing China. This conclusion by the Harvard Centre for International Development has come as shot in the arm. The findings are based on the country’s productive capabilities and diversification possibilities into complex products, including pharmaceuticals and electronics.

However, the moot point is whether even with seven per cent GDP growth we would be able to ensure balanced and socially inclusive development that can check the dichotomy between urban and rural sectors, Arguably, what our politicians, planners and a section of economists, mostly Western educated, miss is that just ensuring higher GDP does not solve India’s problem.

Earlier too there were years which witnessed a good growth rate but it was found that grass-root problems remained. Namely, development of social and physical infrastructure which unfortunately is very poor compared with others similar countries.

Indeed, for this to become a reality, India needs to attract foreign funds like pension funds in Japan and Canada and Australia which are on the lookout for investment options. The latter has $ 2 trillion in pension funds and would be keen to invest in robust infrastructure projects in India. Add to this, at the recent G20 meet, Prime Minister Modi had proposed that the group should be used as a platform for funds disbursement.

Infrastructure apart, sadly, employment also does not figure as a priority in the NDA Government’s scheme of things. Undeniably, the lack of attention to employment generation in a nation saddled with the youngest population is a serious cause of concern.

Shockingly, statistics show that only 18 per cent of working people were regularly employed and 30 percent were casual workers dependent on daily or periodic job-renewal. The remaining 52 per cent were self-employed with extremely low incomes, no work throughout the year and a highly competitive market. Add to this, a significant portion remain under-employed.

Further, over the years the problem has aggravated specially in the last three years due to the Government not taking adequate steps to promote labour intensive industries with latest technology. Development in East Asian economies.

Clearly, greater employment opportunities is the only guarantor of a better life for ordinary people. Though the Government has re-launched its Skill Development Programme with great vigour, it remains to be seen how effective it is. Only time will tell whether those who acquire requisite skills would be helped by the Government to set up ventures and make them successful.

Alongside, unless there is meticulous transformation of the rural sector with an increase in the poor’s livelihoods reflected in higher consumption, the basic problem of the country would continue. Already, rural distress has led to increasing suicides. What good achievements if people die of hunger or suffer from malnutrition? As it stands, former Prime Minister Manmohan Singh and late President Kalam etc have times out of number emphasized revitalization of the rural sector to combat poverty.

According to them, the share of agriculture in national income continues to rapidly fall even as the public’s dependence on remains static. Thus it is imperative that the latest science and technology methods are adopted to increase agricultural productivity, affordable technologies for energy and water efficiency and farm and non-farm expertise to promote growth. Further, even as Government figures show new project announcements and projects underway, banks are worried as the credit off take by corporates has plunged to around four percent.

Obviously the key to growth lies in building a proper investment environment. Emphasis on Make in India to boost industry is not enough we need high levels of efficiency along-with technological breakthroughs to have competitive pricing and make inroads in markets of neighbouring countries. Extremely difficult but not unachievable if one goes by the Chinese example that has low cost of manufacturing, especially in electronic goods, and yet has successfully invaded world markets.

India has to play a vital role in setting up a huge number of labour intensive small scale units having the latest technological inputs with high efficiency. However, the focus has to be on the agriculture sector whose modernization is urgently required. The lab-to-land approach needs to become a reality at the earliest, especially in Eastern and North-Eastern regions.

The process has started but research needs to be transferred to the field to increase productivity. Thus, without being too optimistic on the growth projections, there is need to concentrate on an inclusive development strategy that is geared to advancement of the rural sector. In sum, an integrated developmental approach at the grass-root level towards economic prosperity.