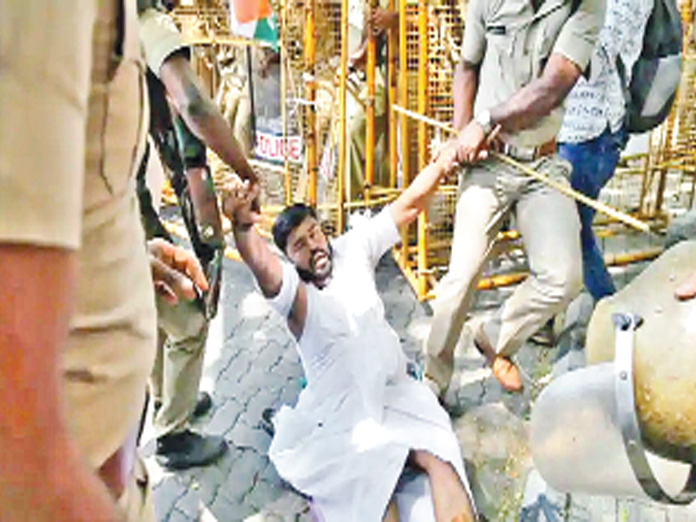 Pinarayi Vijayan had his way, after all Despite massive vigil and protests by proRSS and Hindutva forces, several young women of the activist kind have made their way to the hilltop Sabarimala Lord Ayyappa temple and offered prayers, either alone or in batches of two or three

Pinarayi Vijayan had his way, after all. Despite massive vigil and protests by pro-RSS and Hindutva forces, several young women of the activist kind have made their way to the hill-top Sabarimala Lord Ayyappa temple and offered prayers, either alone or in batches of two or three.

Police support was given to nine women below age 50 so far to enable them offer prayers before the deity, braving the weeks of protests by heavy bands of youths claiming to be protectors of the faith, customs and practices in the hill-top temple that attracts millions of pilgrims season after season. But knives are out against the CM, he’s into choppy waters, and the future for him is uncertain.

Indications are that more young women who are part of Facebook campaigns in support of the September-end Supreme Court order are waiting in the wings to journey up to the hill-top shrine. The SC order had lifted a 1991 Kerala high court ban on women between ages of 10 and 50 menstrual age from visiting Sabarimala, where the lord is installed in a celibate form.

When news spread of two women reaching up to the sanctum sanctorum of the temple and offering prayers in the small hours on Wednesday last, the newly emergent Hindutva forces in the state were first taken aback. Their vigil failed to stall these women’s entry. The high pedestal on which they stood and claimed that they will have the last word in Sabarimala – a temple owned by the Kerala Government and run by the government-entity, the Travancore Devaswom Board – crumbled.

By evening, town after town witnessed demonstrations and violence mainly by BJP and RSS-inspired youths as also those from the Nair Service Society (NSS) which fielded women in the streets in prayer mode, chanting Ayyappa prayers. This, though, was just the start.

By Thursday, a hartal called by some pro-Ayyappa outfits, the BJP and the RSS turned violent across the state. Its impact was largely felt in Thiruvananthapuram, Palakkad, Kozhikode, Kannur and Kasaragod districts. State transport buses and shops that dared to open on the hartal day were the main targets. Total loss to property was estimated at over Rs three crore. Public life was at a standstill.

The Pinarayi Vijayan-led LDF government handled the situation with considerable restraint, bordering on an alleged show of incompetence. Police had been asked to avoid confrontations as far as possible lest the situation should go out of hand. But, the hartal and its aftermath saw massive arrests. Police identified most of the trouble-makers from CCTV footages, police camera images and TV grabs. This was part of a strategy. In two days after the hartal, some 3,000 youths were identified and arrested from their homes in various districts, to be detained under non-bailable provisions.

Police had warned in advance that those indulging in destruction of property will be made to pay through their noses. Matching compensation will be extracted from them by way of hefty fines. The mood of the chief minister was reflected in an incident near the state Secretariat. A few Youth Congress activists who ran into the street and waved black flags at the CM were mercilessly hit by the CM’s convoy. They saved their lives and were swiftly hospitalised with the help of cops.

The next day, Friday, was more or less peaceful except for stray incidents. By forenoon, word spread that a third woman, of Sri Lankan nationality who spoke in Tamil, entered the temple premises on Thursday night and offered prayers. The CM’s office confirmed the incident, and police released camera footages of the woman in front of the temple. She was safely escorted out by the cops.

Hours later, he got a show cause notice from the Devaswom board, asking him to explain why he closed the temple and held the purification rituals without consulting the board which governed the temple. He has been given 15 days’ time to reply. The temple now holding the Makara Vilakku festival will close for the season on January 20.

Notably, the entry of young women, or the news thereof, did not make any difference to the orderly flow of pilgrims or offering of prayers in the temple.

For now, the LDF government seems to have had the last laugh. Asked the chief minister at a public event on Friday evening, “Why no hartal when a third woman entered Sabarimala?”

The last word, though, is not heard yet. A day of hartal and violence was, by itself, too much of a trouble for the general public. The BJP and the RSS, having taken a hit thereafter in the form of young women’s entry to Sabarimala, are now getting set for a new offensive and break the police security in Sabarimala.

For the past two weeks, they were nowhere to be seen in the hills in fighting form – after some top leaders were arrested and jailed by the government. More leaders are now ready to fight the cause and turn the tide in favour of the saffron causes. The Lok Sabha polls are just a few months away, and they cannot afford let their guard down.

The two Communist parties or the Left – whose main base in Kerala has been of the Hindus with a sprinkling of Christians and Muslims thrown in between – are one with the chief minister in helping young women climb the Sabarimala hills and break the tradition. But, faith is a heady potion as Karl Marx had sensed long ago – styling it as the “opium” of the masses. Pinarayi Vijayan is taking a calculated risk. He has made it clear that winning elections and forming the government by themselves are not the end al and et al of a revolutionary movement.

Effecting changes in social systems, for him, seems to be a matter of first priority, unlike the communist chief ministers of the past who coursed through placid waters. He has courage to take matters forward; but if this turns out to be an electoral disaster for the party in the Lok Sabha polls four months hence, his hold on the party is bound to weaken.

Power has for long years been a heady potion for the communists in Kerala, West Bengal and Tripura. Once out of power, the CPI(M) crumbled like a pack of cards in both West Bengal and Tripura. In Kerala, so far they and the rival Congress-led UDF alternated in power every five years. The Congress and the BJP are announcing from roof-tops that Vijayan will be the last Communist chief minister!

So far so good for the CM. He has, by restraining his party rank and file from storming the streets to take on the hartal supporters on Thursday, ensured that attempts to unleash a civil war in the state were thwarted. Police restraint too was part of this strategy to tread a careful course – at a time when the BJP and Modi are breathing down the neck of the CM from Delhi.

History had left lessons for the CM. The first Communist government in the state had been dismissed by the Nehru government in 1959 in the aftermath of a violent Liberation struggle led by the Congress and some community outfits.