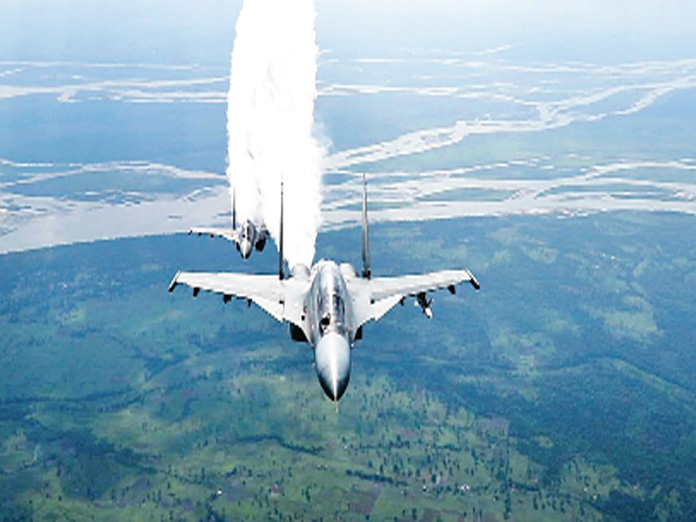 How do soldiers survive at minus 50 degrees Celsius in Siachen and glacier captains carry out evacuation flying over relentless icefields in the...

How do soldiers survive at minus 50 degrees Celsius in Siachen and glacier captains carry out evacuation flying over relentless ice-fields in the world's highest battlefield? These and few other lesser-known stories of the Indian Air Force's operations in the toughest climatic conditions in the country will be unveiled through a special documentary that premiers Friday on National Geographic channel to mark the 70th Republic Day.

Titled 'Extreme Flight: Indian Air Force', the 44-minute film with its stunning visuals, captures the story of selfless service rendered by personnel of the Army who guard the nation at high-altitude border posts, and men and women of the IAF who rush relief material and succour to soldiers in helicopters flown in very harsh weather conditions. Narrated by actor Kabir Bedi, the Republic Day special documentary in English, will also be broadcast on the channel on January 26 at 12 noon and 8 pm and available on Hotstar.

Shruti Takulia, Creative Director and Vice President, India productions at the National Geographic, says, the project had many challenges, but the IAF provided valuable guidance and technical and logistic support to help tell the untold or lesser-known stories to people, while ensuring the safety of the crew. Siachen Glacier is a place where wind speed could reach 160 kmph, temperature sometimes falls below minus 50 degrees Celsius and has low oxygen level, and at such high-altitude areas mere survival itself is a challenge. Soldiers face several risks, including suffering frost bite, depression, sleep loss, diminished appetite, hypoxia or even memory loss, the film says.

"As with all our projects, idea was to tell these lesser-known stories and IAF's partnership made the film so powerful in capturing the various narratives, whether it is challenges faced by the first woman glacier captain of the Air Force, Sq Ldr Khusboo Gupta, at the Leh Air Base, to the risk involved in flying a helicopter in extreme weather conditions," Takulia told PTI in an exclusive interview. Gupta is part of the Siachen Pioneers, a helicopter unit assigned to support the glacier's least-accessible posts. Takulia said the idea for the film first germinated in 2016 and "then we took it further and then officials from the IAF also offered a lot of suggestions. Then the research phase began for which we consulted various defence and medical experts".

"The actual shoot began last year in February and the final shoot ended in May. From Jammu and Kashmir to Northeast, we have showcased the amazing stories of survival that not many know about. In the film, we can see defence personnel in deep snow, sometimes three feet-deep or pilots and others wearing battery-heated boots to ward off frostbite. We tried to capture these microscopic details to show how difficult the survival is there," she said.

According to the documentary, Siachen has the world's highest battlefield and the film also captures the Leh Air Base located in picturesque Leh town with largely Buddhist population. At 10,682 ft, it is a crucial base for high-altitude air maintenance on Siachen. In Northeast, Ziro Advanced Landing Ground in Arunachal Pradesh at 5,121 ft has been featured, where from Mi-17 carries out evacuation sorties and other operations, often affected by mist and rains.

The Chabua Air Force Base in Assam also has been filmed, and breathtaking mid-air shots of Sukhoi Su-30 aircraft will delight the viewers. Takulia said the IAF had specified norms for filming and the crew members were provided safety harness during the shoot which took place under the scrutiny of the IAF officials.

"For several sequences where we did not have the crew, we requested the IAF and its pilots flying the planes to take shots for us during operations. It was a great team work between the IAF and National Geographic," she said. But it was not just one story of survival, as for the crew filming the documentary, it too was a survival test against the odds. "We had chosen a very tight team and fitness was a major factor in including them in the project. They underwent some health regimen before leaving for Leh and also spent two-three days in Leh before the actual shoot to acclimatise themselves with the extreme weather conditions," Takulia said.

The creative director of the project, who made a few trips to oversee shooting, said many crew members had suffered injury during the filming. "I once received a report from the crew which read like -- one torn ligament, one sprained ankle, one tetanus shot, one hand with rusted barbed wire in it, two crew members who collapsed due to a lack of oxygen, clothing blown away by the downwash or blast of an aircraft engine three times, four instances of crew member who fell sick, five instances of oxygen deprived and very cold crew members at 18,000 ft and multiple instances of ego bruised from falls in the snow," she said.

They were injured but their sense of humour was intact and the enthusiasm of the crew was still very high till the end of the shoot that tested their limits, physical and mental, Takulia added. The film also captures a 'stranded pilot's struggle for survival' as part of a course of the Jungle and Snow Survival School of the Air Force in Pir Panjal range (4600-13,500 ft) of the Himalayas. Flt Lt Anirudh Grover, whose preparations to earn the coveted badge of Glacier Captain has been captured in the film, says, "The look one gets from a jawan after delivering ration or a letter to him from home that is utterly satisfying and that is what keeps me going."