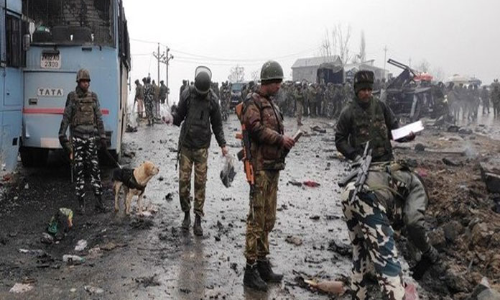 As a sequel to the Pulwama terror attack, many Bollywood film associations have resolved neither to work with Pakistani artistes and not let producers...

As a sequel to the Pulwama terror attack, many Bollywood film associations have resolved neither to work with Pakistani artistes and not let producers release their films in Pakistan and boycott shootings of distributors not following this decision.

In fact, Atif had provided playback for a song “Baarish” with Shashaa Tirupati for the film “Half Girlfriend” released in 2017. The song picturised on Arjun Kapoor and Shraddha Kapoor was released by Zee Music Company.

It may be recalled that after the Uri attacks (2016), the Raj Thackeray-led “Maharashtra Nav Nirman Sena” had set a 48-hour deadline for all Pakistani artistes working in India to leave the country, due to which and Fawad Khan (“Yeh Dil Hai Mushkil”, 2016) and Mahira Khan (“Raees”,2017) had to leave India. Similarly, Lahore born Sajal Ali, left India immediately after working in Sridevi starrer “Mom” in 2018.

Basically, Bollywood’s close relationship with Pakistan goes on despite Pak-sponsored cross border terrorism. The reason being the Muslim world is the biggest market for Bollywood. As such, it is not surprising that the films are often made friendly to Islamic customs.

In fact, Pakistan is the biggest market in terms of footfalls for Bollywood movies and outside the subcontinent, UAE and few other Gulf countries are a big market. Other than Pakistan, Hindi films are also released in Islamic country Malaysia. Bollywood movies are also watched in Bangladesh, Nepal and Myanmar mostly through pirated DVDs.

In Afghanistan, the people are passionate about Hindi films. Madhubala’s Afghan descent had made her a favourite in Afghanistan. Kabul-born late Kader Khan had a huge following there. Late Feroz Khan had shot scenes from “Dharmatma” (1975) in Bamiyan and Band-e-Amir in Afghanistan.

Recently “Kabul Express” (2006) was also shot in Afghanistan. By the 1980s, the Bollywood was so popular in Egypt that they threatened the revenues of the local film industry, forcing the government to limit screenings well into the 1990s.

The USA, the UK, Canada, Australia, New Zealand, Hong Kong and Japan are a few other territories where Bollywood films have been released. Surprisingly “Jai Santoshi Maa (1975 mythological) was a hit even in places like Birmingham and Manchester in the UK that have large Muslim populations.

In Tajikistan and Uzbekistan local channels show Hindi films every week. There Akhmadjon Kasimov’s Radio show “Namaste Hindiston” has been on for over 15 years. In Taiwan, Hong Kong and South Korea, people appreciate Indian films. Other surprising markets are the West and Central Africa countries like Nigeria.

Aamir Khan’s ‘3 Idiots’ was a huge success in China, followed by “PK”. But China allows the release of only 36 films of foreign origin a year, out of which 25 are Hollywood films.

Three hours of song and dance, fight and maybe a few tears. Indian brand of cinema is thriving, whether dubbed, subtitled, pirated or officially released, even in the unlikeliest of places. While Bollywood gets only a tenth of Hollywood's box office collections, it is rapidly growing. If 20-odd India's film industries are added, then that figure gets nearly half of Hollywood. In fact, Bollywood is everywhere.

A pirated print or DVD is not hard to find, “Sholay” is telecast several times a year, the Khans are a hit and people are crazy for Krrish. Amitabh Bachchan is the people’s biggest hero.

The Bollywood, which is on globe-trotting mode, continues to welcome the increased number of foreign artiste and, that is the reason they “crossover” into India. The recent names include Katrina Kaif, Nargis Fakhri and Jacqueline Fernandez who came to India in the last one decade.

The trend began almost with Salma Agha, the singer who provided playback to the film “Nikaah”(1982) and also won Filmfare award. Then she went on to act in many movies. She has now been given Overseas Citizenship of India. Her daughter Zara Khan too made debut in Yash Raj’s romantic thriller “Aurangzeb” in 2013.

Similarly, Lahore born singer, Adnan Sami Khan (Adnan Sami), who came to India on March 13, 2001 on a visitor’s visa valid for a year, issued by the Indian High Commission in Islamabad, extended it many times and was eventually given Indian citizenship on “humanitarian ground”, on first January 2016.