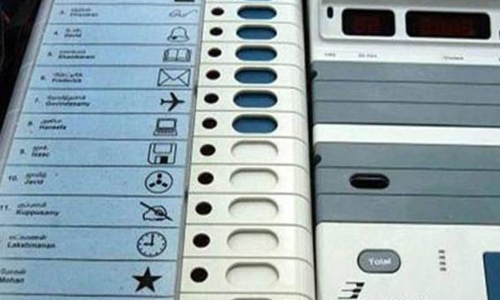 The impending Lok Sabha elections have opened up too many debates The latest being the internal and external security of the country However, all...

The impending Lok Sabha elections have opened up too many debates. The latest being the internal and external security of the country. However, all debates must find their final dénouement with the electors registered to vote at the EVMs on the election day. While the debates themselves are a part of the political process, the deployment, management, security, integrity and believability of the EVMs is an administrative issue under the direct supervision of the Constitutional body, the Election Commission of India (ECI).

The Constitution mandates the ECI under Article 324 with, “Superintendence, direction and control of elections.” The very first clause under this article mandates the Commission with “The superintendence, direction and control of the preparation of the electoral rolls for, and the conduct of, all elections to Parliament and to the Legislature of every State and of elections to the offices of President and Vice President held under this Constitution …”

Kiran Chandra and Srinivas at a press conference in Hyderabad pointed out that as per the RTI responses of the ECI, the state government dragged its feet in providing support staff, premises and financial clearances to the Chief Electoral Officer of the state, resulting in delays, slowing down of the revision process.

To complete the process, the ECI handed over the entire voters’ list to the State Resident Data Hub (SRDH) of the state government to match and verify the voters list. Two serious flaws of the process were, handing over the voters list to a government-run department, instead of undertaking a door-to-door verification that ECI is required to do.

Secondly, the SRDH project is a surveillance project. The tender floated by the police department of the government invites Request for Proposals “to design, develop, implement and maintain suitable technologies for integrated information hub to achieve the objective of 3600 profiling of persons of interest.”

The data thus collected includes detailed information from 16 services/criteria such as bank accounts, caste, religion, water and electricity connections. Between attempts to ‘purify’ the electoral rolls through linking with Aadhaar (since suspended) and verifying with SRDH data instead of door-to-door verification, some 30 lakh voters have fallen through the cracks.

The ECI does not have the mandate to profile voters on the parameters of class, caste, and religion or place of residence. Instead of doing its own verification, the ECI admits to have handed over the process to a state government agency that uses its own software.

Srinivas approached the High Court on 11 December 2018, but the ECI is yet to file its response to the petition. Kiran Chandra and Srinivas assert that the ECI has been less than truthful to the court and attempted to mislead it, as it has not revealed what software was used, what were the instructions, whether the process was done under the direct supervision of the ECI or left to the third party software company and the IT department of the Telangana State.

Parallelly, the debate over EVMs and VVPATs is also raging. There have been RTI responses of various EVM suppliers that appear not to match with the numbers of EVMs in circulation, some EVMs are randomly found in possession of sundry politicians further confounding the picture. While the ECI has been asserting the EVMs cannot be tampered with, they are yet to provide answers to the problem of possible replacement of EVMs with rigged data post-voting.

Each time the ECI schedule ensures that the EVMs are stored somewhere for weeks before counting takes place. Two Reliance employees were caught with laptops inside such a facility about which no satisfactory explanation has come forth.

To restore the faith of the electorate in the process and to render the demand for paper ballots infructuous, the ECI should have a robust system of matching EVM data with the VVPAT slips. Scores of cases have been filed by various political parties raising such issues after each election, including the recent election in Telangana. But the cases do not come up for hearing.

The courts drag their feet on these issues. Once again the Lok Sabha elections are looming, but many of these issues have remained unresolved and unaddressed.The ECI says “No Voter Left Behind”. But the actions taken by the system must ensure that voters are not disenfranchised summarily on opaque criteria.