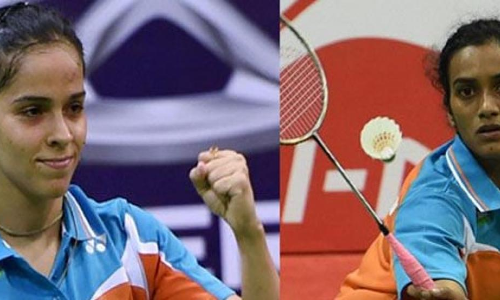 Top Indian shuttlers Saina Nehwal and P V Sindhu advanced to the second round of the women\'s singles competition at the Hong Kong Super Series badminton tournament with contrasting victories in Kowloon on Wednesday.

Hong Kong: Top Indian shuttlers Saina Nehwal and P V Sindhu advanced to the second round of the women's singles competition at the Hong Kong Super Series badminton tournament with contrasting victories in Kowloon on Wednesday.

Saina, on a comeback trail, was the first to take the field and she recorded a hard-fought 12-21 21-19 21-17 win over Thailand's Porntip Buranaprasertsuk in the opening round at the Hong Kong Coliseum.

London Olympics bronze medallist Saina, who had lost to Porntip in the opening round at China Open after making a comeback following a three-month lay-off due to injury, avenged the defeat with her win over the World No. 12 Thai shuttler.

The fifth seeded Indian, who is looking to seal her Dubai Super Series Final spot, will next take on Japan's Sayaka Sato who defeated Chiang Mei Hui of Chinese Taipei.

Sindhu, on the other hand, had an easy outing as she notched up a 21-13 21-16 win over Susanto Yulia Yosephin of Indonesia in 32 minutes.

The second game was a tight contest with the two opponents refusing to yield an inch to each other. After being levelled at 9-9, Sindhu zoomed ahead at 12-9 but her Indonesian rival fought back to tie the score at 16-16.

Sindhu was in no mood to allow her opponent to come back as she took the next five successive points to take the second game and wrap up the match.