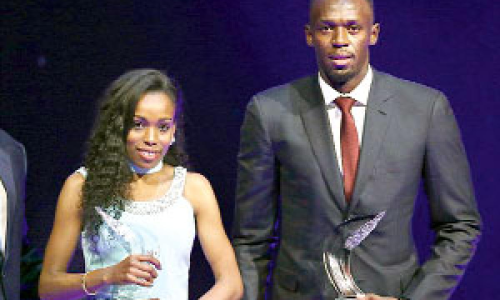 Nine-time Olympic champion Usain Bolt has been named the IAAF\'s male athlete of the year for a sixth time.

Monaco : Nine-time Olympic champion Usain Bolt has been named the IAAF's male athlete of the year for a sixth time.

The Jamaican sprinter took his overall total to nine Olympic gold medals at Rio 2016 with his third 100 metres, 200m and 4x100m relay hat-trick and was nominated for the award alongside Mo Farah and David Rudisha.

Bolt was presented the award - which he had already won more times than anyone else, and claimed on five occasions between 2008 and 2013 - by IAAF president Sebastian Coe in Monaco on Friday, while the female athlete of the year gong went to Ethiopia's Almaz Ayana.

Canada's Rio 200m silver and 100m bronze medallist Andre De Grasse was named male rising star of the year, with Belgian Nafissatou Thiam, the heptathlon champion at the Games in Brazil, taking the women's award. American Harry Marra, who guided decathlete Ashton Eaton to his second successive Olympic gold over the summer, was given the award for the coaching achievement, while the president's award, recognising great service to athletics, went to Tegla Loroupe, the chef de mission for the Refugee Olympic Team in Rio.

The IAAF's 207 member associations meet to vote on Coe's package of reforms at the first special congress in over 20 years.

Coe is looking to implement an improved governance structure, greater representation for athletes, gender equality and the creation of an independent integrity unit.

'I know Seb Coe is trying to make track and field more transparent to the media so everyone can see what's happening and no one person is fully in control,' he said, speaking at a press conference.

'That's a big move, it's a bold move for him as IAAF president, to make it open. It also helps the sport so people can feel more comfortable and trust the sport more. He is making some bold moves.