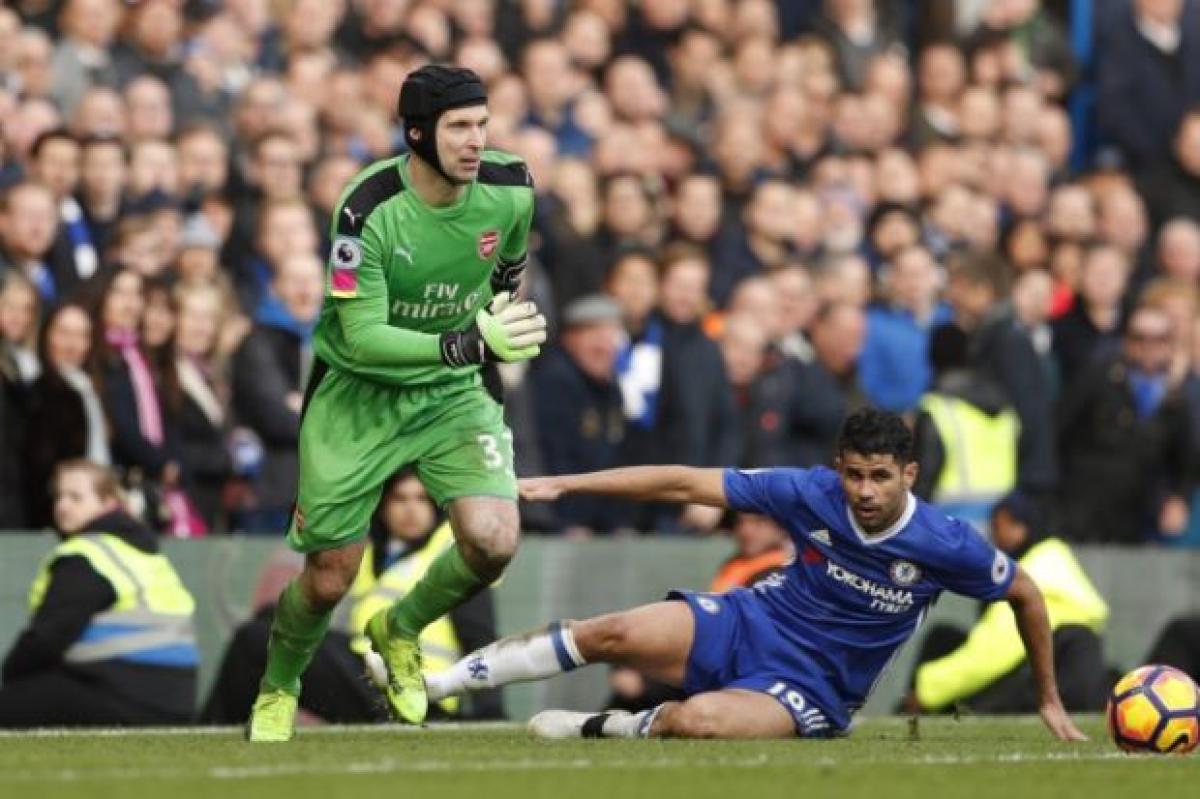 Chelsea moved another step towards regaining the Premier League title with a 3-1 drubbing of Arsenal in the table-topping London derby at Stamford Bridge on Saturday as only Tottenham Hotspur maintained their distant pursuit of the leaders.

Chelsea moved another step towards regaining the Premier League title with a 3-1 drubbing of Arsenal in the table-topping London derby at Stamford Bridge on Saturday as only Tottenham Hotspur maintained their distant pursuit of the leaders.

Antonio Conte's side moved 12 points clear of Arsenal with a performance decorated by one of the goals of the season, a dazzling individual effort from Eden Hazard starting from near the halfway line.

The 2015 champions' command at the top of the table was strengthened further with fourth-placed Liverpool falling 13 points adrift after their wretched 2017 continued with a shock 2-0 defeat at resurgent Hull City.

Only second-placed Spurs, the one team to have defeated Chelsea in their last 17 matches in all competitions, appear up for the fight, reducing the gap at the top to nine points with their 1-0 win over Middlesbrough in the day's late match.

Hull's win over Liverpool saw them clamber up one place to 18th in the relegation zone while another startling result featured Crystal Palace, who lost 4-0 at home to bottom club Sunderland, with all the goals coming in the first half.

Conte was a satisfied man as he watched Chelsea avenge their worst defeat of the season in September at the Emirates, the 3-0 reverse that prompted him to change their tactical approach.

The Blues have never looked back since and an early header from Marcos Alonso, the dazzling second-half solo goal from Hazard and a poor clearance from Petr Cech that allowed Cesc Fabregas to chip into an unguarded net in the dying minutes sealed their revenge.

Hazard's goal was, by his own admission, "beautiful". The Belgian picked up the ball just inside his own half, swerved away from Laurent Koscielny, outmuscled Francis Coquelin and turned Koscielny inside out again before beating Cech from close range.

Olivier Giroud earned a stoppage-time consolation goal but a fourth defeat in nine league matches effectively ended Arsenal's title hopes for another season as they now lie third on 47 points, after 24 games, to Chelsea's 59.

"It was an important game. I consider Arsenal one of the six teams that can fight for the title until the end of the season. To put them 12 points behind is very important for us," said Conte, after presiding over a 14th home win in 15 games at Stamford Bridge.

"In every session they show me great attitude and great will to fight and win this league."

Liverpool's defeat looked to have ended their challenge too as Juergen Klopp's men succumbed to goals from Hull's on-loan Senegalese strikers, Alfred N'Diaye and Oumar Niasse.

It continued a woeful run for the Reds in 2017, who have won just once in their last 10 games, leaving a baffled Klopp to suggest their slump made "no sense".

Tottenham, though, appear to continue to believe as they stretched their unbeaten run in all competitions to 14 games and hit the half-century of points, with Harry Kane's second-half penalty earning victory in a game they dominated but made heavy weather of sealing at White Hart Lane.

Sunderland's Jermain Defoe scored twice in first-half stoppage time as he turned Sam Allardyce's reunion with his former club into a nightmare, the Palace boss having to watch his side ship three goals in six minutes before the break.

Sunderland remain bottom on 19 points but now have the same tally as Palace, one behind Hull, who are making dramatic strides under new Portuguese boss Marco Silva.

Everton, unbeaten in the league since Christmas, continued their excellent run with Romelu Lukaku scoring four in their helter-skelter 6-3 win over Bournemouth, his first coming after just 30 seconds to equal the fastest in the League this season.

The Belgian international striker is now the league's leading marksman with 16 goals with Chelsea's Costa and Arsenal's Alexis Sanchez on 15 and Kane and Defoe on 14 along with Manchester United's Zlatan Ibrahimovic.