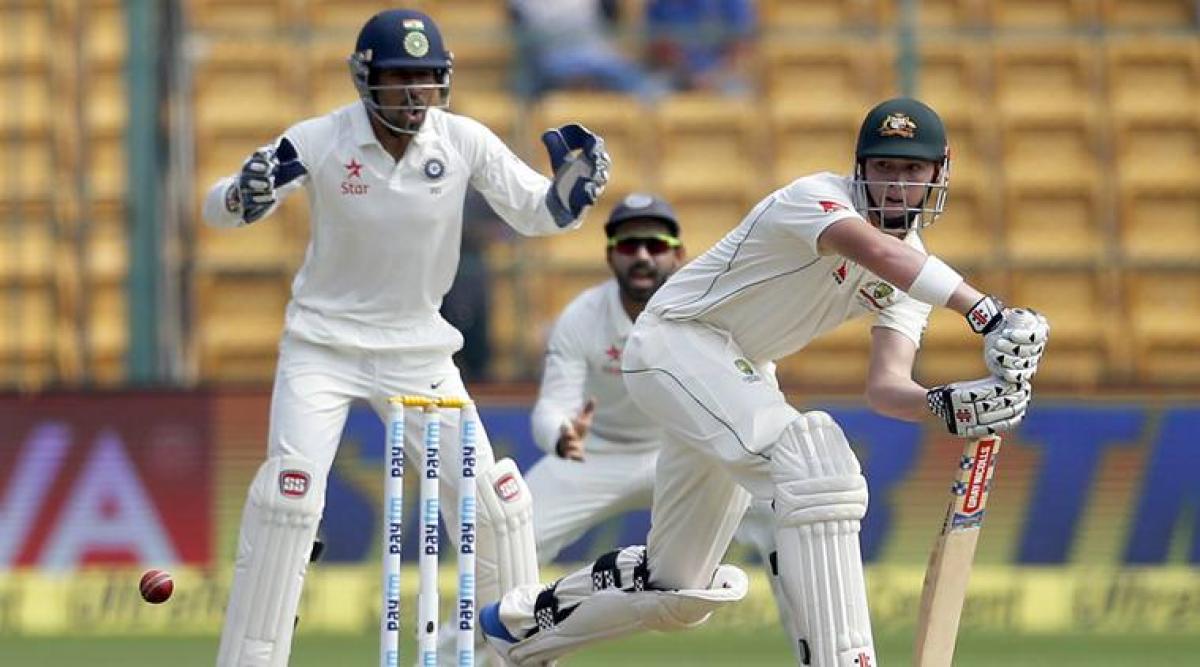 India removed dangerous opener David Warner and in-form captain Steve Smith cheaply on the second morning as they kept a tight leash on the Australians who reached to 87 for 2 at lunch in an intense session of cricket in the second Test here today.

Bengaluru: India removed dangerous opener David Warner and in-form captain Steve Smith cheaply on the second morning as they kept a tight leash on the Australians who reached to 87 for 2 at lunch in an intense session of cricket in the second Test here today.

Warner (33) and Smith (8) fell to Ravichandran Ashwin (1/22) and Ravindra Jadeja (1/11) respectively as the Indian bowlers, especially the spinners, made it difficult for the Australians to score runs on a turning Chinnaswamy Stadium track which had a lot of cracks.

Ashwin, who opened the bowling with Ishant Sharma, gave India the breakthrough in the sixth over of the day and third of his own as a gem of delivery knocked off Warner's off-stump as the batsman was completely beaten by the extravagant turn of ball after landing outside the leg. Warner's 33 came from 67 balls and contained three fours.

Smith, who had scored a brilliant century in the first Test which Australia won by 333 runs, fell three overs before lunch after he consumed 52 deliveries for his eight runs which did not have any shot to the boundary.

Opener Matt Renshaw, who was dropped by Indian captain Virat Kohli at slips off Umesh Yadav's bowling, was batting on 40 off 144 deliveries at the lunch break after starting the day on 15. Shaun Marsh was giving him company on 2 off 10 balls.

Australia, who were 40 for 2 overnight, could only add 47 runs from 29 overs while losing two important wickets. They now trailed India by 102 runs with their eight second innings wickets in hand.

India, who were shot out for a paltry 189 in the first innings, showed a lot of intent and they were fired up for most part of the morning session.

The session belonged to India as they put shackles around the Australian batsmen by not allowing them to score freely.

The crucial session also saw a lot of theatrics and verbal sparrings between the players of the two sides.

Ishant and Smith were involved in some theatrics with the India pacer making faces on quite a few occasions to the visiting captain after his shout for an LBW was turned down by the umpire. Kohli was also seen enjoying the moment as he wore a smile from behind to what Ishant was doing.

Smith looked like amused initially but later retorted in his own way. The Australian captain also survived a close LBW decision. India asked for a DRS referral but to no avail.

The Australian captain was not to play a long innings today as he succumbed to the intense Indian pressure in the 42nd over as his defensive shot off Jadeja hit the inside edge of his bat and the pad before wicketkeeper Wriddhiman Saha took a fine diving catch.